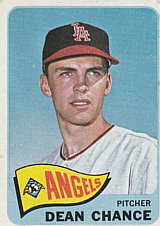 "Every time I see his name on a lineup card, I feel like throwing up" - Mickey Mantle

"He is the dumbest guy I've caught." - Buck Rodgers, not during the 25th century

Dean Chance was the first big pitching star of the fledgling Los Angeles Angels. He was a two-time All-Star and the 1964 American League Cy Young Award winner. A two-time 20 game winner, Dean's damage was done entirely in the 1960s, burning out of the bigs at the age of 30.

Born in 1941, Dean signed with the Baltimore Orioles as an amateur free agent in 1959 after a tremendous high school career, during which he was 52-1. He went 10-3 for the Bluefield Orioles in the Appalachian League in his first professional season. In 1960, he was 12-9 for the Fox Cities Foxes. The Orioles inexplicably left him unprotected before the American League expansion draft so Dean was gobbled up by the Washington Senators. The new Senators, whose pitching would be suspect for a number of years until they moved to Texas, promptly traded Chance to their expansion compatriots, the Los Angeles Angels, for Joe Hicks as part of one of the trades mandated by AL President Joe Cronin to cover up his mistakes in failing to enforce the draft rules in his role as its overseer. Chance pitched most of 1961 for the Dallas-Fort Worth Rangers, going 9-12, before coming up to the majors for his debut on September 11th at the age of 20. Surprisingly, Chance was not the team's youngest player; Jim Fregosi and Bob Sprout were both 19, while Tom Satriano and Dan Ardell were both also 20.

Chance became part of the starting rotation in 1962, going 14-10, 2.96 with 2 shutouts and 8 saves in 50 games (24 starts), then 13-18, 3.19 with 2 shutouts and 3 saves in 1963. Dean had himself an unbelievable year in 1964, winning the Cy Young Award while dominating the AL with a 20-9 record, a league-leading 1.65 ERA, 15 complete games, 11 shutouts, 4 saves and 207 strikeouts in 46 games (35 starts) and a league-leading 278 1/3 innings. He had started the season slowly, going 5-5 over the first half, but was utterly dominant over the second half, with a record of 15-4, 1.29. He made the All-Star team for the first time that season, starting the game and pitching 3 scoreless innings. At a time when there was only one Cy Young Award winner in baseball, he was the only recipient from the AL between 1962 and 1966, after which one award was given per league. During that five-year period, all five winners were from Los Angeles, the other four going to future Hall of Famers Sandy Koufax and Don Drysdale with the Los Angeles Dodgers.

Dean was a power pitcher, relying on a sinking fastball to get batters out; he also threw the occasional screwball as a change-up. He threw his pitches low, usually working the outside corner at knee height. He had a three-quarters delivery with a bent body motion, and almost never threw a pitch above the waist. However, as noted in the quote from his catcher Buck Rodgers above, he did not have the most cerebral approach to the game, and once his fastball was gone, he was unable to adjust. He was a close friend of Bo Belinsky, who had been a teammate in the Orioles' organization and emerged as a (briefly shining) star with the Angels in 1962. The two were men-about-town, using Los Angeles as their playground, hanging out with models and movie stars (Chance had married in 1961, and had a son the following year, but the marriage did not last).

Chance had a major league career ERA of 2.92, currently (as of 2020) tied for 146th on the all time list for lowest ERA. He was helped by the fact that most of his career took place in the second dead-ball era, but his lifetime ERA+ is still an excellent 119. Additionally, he enjoyed three long scoreless inning stretches in his career, including twice in 1964, of 27 innings or better. He was a terrible hitter, though, batting a mere .066 in 662 at-bats, striking out 420 times for one of the highest strikeout rates in history.

In 1969, Dean became a boxing manager and promoter, and was, at one time, president of the International Boxing Association. He also ran various business ventures, investing in real estate, working in a carnival and for a poster company among other gigs. In August 2015, Dean took his place in the Angels Hall of Fame, along with Tim Salmon and Mike Witt. He died two months later at his home in Wooster, OH.