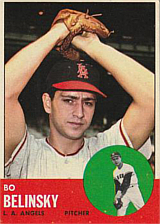 "People keep telling me I never lived up to my potential, that I wasted my talent. . . I just didn't have as much as people thought. I got more ink for doing less than any pitcher who ever lived." - Bo Belinsky

"I came to the Angels as a kid who thought he had been pushed around by life, by minor league baseball. I was selfish and immature in a lot of ways and I tried to cover that up. I went from a major league ballplayer to hanging onto a brown bag under the bridge, but I had my moments and I have my memories. If I had the attitude about life then that I have now, I'd have done a lot of things differently. But you make your rules and you play by them. I knew the bills would come due eventually, and I knew I wouldn't be able to cover them." - Bo Belinsky, to Ross Newhan, in the book The Anaheim Angels: A Complete History

To baseball fans, pitcher Bo Belinsky is best remembered for throwing a no-hitter for the Los Angeles Angels. Ironically, it would be his curse which would lead to him being labeled as a baseball under-achiever. Away from the diamond, he was known for dating a string of Hollywood starlets.

Originally signed by the Pittsburgh Pirates in 1956, Belinsky played several years in the Baltimore Orioles chain before being selected by the Los Angeles Angels in the 1961 Rule V Draft. He joined the Angels' rotation in 1962 and, in only his fourth big league appearance on May 5th, he hurled a no-hitter against the Orioles, striking out 9 in the process. As of late June of his rookie season, he had a 7-2 record, but ended the year with a 10-11 mark. Belinsky played two more years with the Angels, followed by two seasons with the Philadelphia Phillies and one summer with the Houston Astros. Back in the minors with the Hawaii Islanders in 1968, he threw another no-hitter. He made it back to the big leagues with the Pittsburgh Pirates in 1969 and Cincinnati Reds in 1970, the final year of his career.

Away from baseball, Belinsky dated a string of actresses including Mamie Van Doren, Ann-Margret, Tina Louise, Juliet Prowse and Connie Stevens. He later married and divorced a Playboy centerfold as well as an heiress. He also made appearances in several television shows including 77 Sunset Strip. After baseball, he worked for the Findlay Automotive Group for ten years in the Las Vegas area. He suffered from bladder cancer and other health issues and died of a heart attack at age 64.