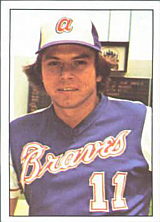 Darrell Evans was a low-average slugger who hit 414 home runs in a 21-year major league career. He played in the 1984 World Series and was a member of the great 1984 Detroit Tigers who won 104 games in the regular season. Primarily a third baseman (although he also played much at first base), his defense was respectable, although he never won a Gold Glove. The most similar player (based on similarity scores through 2010) is, unsurprisingly, another low-average slugger, Graig Nettles, who was an almost exact contemporary of Evans - Darrell's major league career was 1969-89 while Graig's was 1967-88.

Darrell Evans grew up in a family where his father, two uncles and grandfather played baseball and mother and two aunts had played professional softball. His grandfather, Dale Salazar, played minor league ball. After school, he would play catch with his mother, who was known for her strong arm and speed during her playing days. Instead of hearing kids' stories in bed, his father read to him from So You Think You Know Baseball?.

Evans had poor vision as a kid, but still could hit. As a junior in high school, the young third baseman called for a pop-up during an American Legion game - and the ball landed in right field. The next day, he got his first glasses, then switched to contact lenses. He said he couldn't even see the pitcher without them and his uncorrected vision was 20/600 in one eye and 20/800 in the other.

His first pro year: starting with a splash[edit]

Darrell spent the winter in the Marine Reserves basic training and the season was already two months over when he played baseball. After six months of having not played, he pushed himself and injured his arm the first day back, tearing all the tendons in part of his shoulder. He couldn't even throw from third to the mound but he told the A's he was OK. He struggled, hitting .241/~.300/.353 with the Birmingham Barons and fielding .927. The A's gave up on him. Evans says he was so mad at pushing himself so hard he got injured that "I would've hit myself in the head if it didn't hurt so much to lift my arm."

Evans had fine run with Atlanta, finishing seventh in both the 1972 NL and 1973 NL in OBP and third in slugging in '73 and making his first All-Star team that year. He led the '73 NL with 124 walks and was third in homers and RBI. Along with Hank Aaron and Davey Johnson, he became part of the first trio of 40-homer teammates in baseball history. He led the league in walks again in '74 and was third in '75. In 1976, Evans imploded, only hitting .222/.329/.381. The season began horribly - he made four errors on Opening Day. During the year, he was traded with Marty Perez to the San Francisco Giants for Willie Montanez, Craig Robinson, Mike Eden and Jake Brown.

In '85, the 38-year-old became the oldest player to win a home run crown and also the first player to hit 40 homers in a year in both the NL and American League. Barry Bonds would later lead his league in homers at an older age, but the circumstances were questioned by some in the media. The 138 OPS+ Darrell put up that year was the third-best of his career. Evans beat out 37-year-old Carlton Fisk for the home run title in a duel of veterans. He was 5th in the AL in slugging, 8th in OBP and seventh in walks.

Evans remained productive for several more years. At age 40, he scored 90, drove in 99, walked 100 times, hit 34 bombs and had a 135 OPS+. He was 3rd in the AL in homers and 4th in walks and finished 12th in MVP voting, his highest placement. He hit 100+ home runs for the Braves, Tigers and Giants; only Reggie Jackson reached that mark for three different teams in the 20th Century other than Evans; Alex Rodriguez, Jim Thome and Adrián Beltre would do so overlapping the 20th and 21st Centuries.

Evans' career .248 batting average might be one the most deceiving statistics in baseball history. Bill James wrote that Evans was "probably the most underrated player in baseball history." While not all agree with the argument put forward by James, the opinion is shared by many with a statistical inclination, as Evans' low average and high walk combination is one under-appreciated by many. With a sharp eye at the plate, Evans walked over 100 times in five seasons and retired with a career .361 OBP. It is common to point out that Darrell and contemporary Dwight Evans (no relation) were both overlooked throughout their careers. Additionally, Darrell spent most of his career in the same league and at the same position as Mike Schmidt or Ron Santo, which led to his being overshadowed. James ranks him as the #10 third baseman of all-time and points out that he clearly was superior to another contemporary and Hall of Famer, Tony Perez. He only got 1.7% of the vote in the one time he was on the Hall of Fame ballot, clearly far less than he deserved. Evans was the second player with 400 career homers to miss out on the Hall during the first 15-year selection period (the prior one was a far more one-dimensional threat, Dave Kingman). As of 2006, he ranked 39th all-time in MLB in homers (414), 10th in walks (1,605) and 44th in times on base.

On his 41st birthday, Evans hit a home run off Chris Bosio: this is the oldest birthday home run ever. (Bob Thurman, Joe Morgan, Wade Boggs and Tony Phillips each homered on their 40th birthdays.)

When Eddie Mathews became an Atlanta coach, he told Evans, "I was just like you when I first came up...I couldn't catch the ball and I couldn't throw either." Mathews spent untold hours helping Evans improve his fielding skills. Evans recently commented, "Eddie would hit hard liners and grounders to me at third then, as I got better, he would gradually move up the line and hit them even harder." Even today, Evans credits Mathews with making him into a solid third sacker.

Evans was a member of the New York Yankees coaching staff in 1990. He was a coach for the 1995 Michigan Battle Cats and managed the independent Tyler WildCatters in 1997, the Wilmington Blue Rocks for the first half of the 1998 season, the Huntsville Stars in 1999 and the Aberdeen Arsenal in 2000. After a few years when he mainly coached in fantasy camps, he returned as manager of the Long Beach Armada in the Golden Baseball League from 2005 to 2007 and was the hitting coach of the Orange County Flyers in 2008. He became the manager of the new franchise, the Victoria Seals, in 2009, moving to take the reins of the St. George Roadrunners in 2010.

Sources include 1968, 1970 and 1971 Baseball Guides, The Fall of the Roman Umpire by Ron Luciano and the new Bill James Historical Baseball Abstract