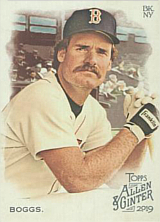 Inducted into Hall of Fame in 2005 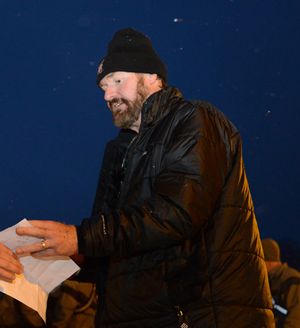 “The only time the Hall of Fame ever came into my mind was probably the time I was rounding first going into second when I hit my home run for my 3,000th hit. I thought, 'Well, there's my ticket. If anybody wants to vote for me for Cooperstown then I've got the credentials to get in.’” - Wade Boggs

Hall of Famer Wade Boggs played 18 years in the majors, winning an impressive five batting titles as well as two Gold Gloves. He was one of the biggest stars of his era.

Boggs was signed as a 7th round pick in the 1976 amateur draft by the Red Sox and scout George Digby. Even with his long career, he did not reach the majors until he had played six years in the minors, hitting over .300 almost every year. It is likely that the Boston Red Sox management did not appreciate how good he was because the team averages with some of Boggs' teams in the minors were pretty low. For instance, with Pawtucket in 1980 when Boggs hit .306, few of his teammates were able to hit as high as .250. In 1981, Boggs and Cal Ripken Jr. played against each other in the longest professional game in history. Both played third base and the official scorecard is on display in the Hall of Fame.

Wade broke into the majors hitting .349 in 1982 and was in the general area of .350 for most of his seasons through 1988. He was usually among the league leaders in on-base percentage (he led the league six times) and also doubles (he led the league twice) through 1991. In 1987, he showed some power with 24 home runs, one of only two times that he would reach double figures in big flies. Although he hit over .340 only once after 1988, he still usually hit .300, and finished his career hitting .301 in 1999. With his 724 minor league hits, Boggs' total of 3,734 hits in organized baseball is sixth all-time. In 1998, he became the third major league player to homer on his 40th birthday, following Bob Thurman (1957) and Joe Morgan (1983). Boggs was the first player to hit a home run for his 3,000th hit, in 1999 with the Tampa Bay Devil Rays; Derek Jeter later did it in 2011. Late in his career he pitched a couple of times, giving up one run in 2 1/3 innings for a 3.86 ERA. Based on similarity scores, no player is truly similar to him, but the most similar are Rod Carew and Tony Gwynn, two other multiple time batting champions.

After his playing days, Boggs was the Devil Rays' hitting coach in 2001. Four years later, he was elected to the Baseball Hall of Fame on January 4, 2005 by the Baseball Writers Association of America. In 2011, he was elected to the International League Hall of Fame. On May 26, 2016, his uniform number, 26, was retired by the Boston Red Sox; Tampa Bay had earlier retired number 12 in his honor. He was inducted into the BoSox team Hall of Fame in 2004.

He had a well-publicized affair with Margo Adams, which apparently did not impact his hitting. He later admitted that he was a "sex addict". Boggs' "Delta Force" plan was used to film his teammates while they were cheating on their wives as blackmail to keep his own clandestine relationships secret.

He appeared in The Simpsons episode "Homer at the Bat". He later appeared in an episode of the USA Network series Psych as himself. Boggs was also the subject of two episodes of It's Always Sunny In Philadelphia in which the show's gang (and later "an all-female reboot" gang) attempted to break an urban legend record of Boggs' by drinking 70 beers individually during a cross-country flight. Boggs inducted "Mr. Perfect" Curt Hennig into the WWE Hall of Fame in 2007. The late wrestler and Boggs had struck up a friendship after filming some vignettes together for Perfect's return to the wrestling ring in 1992.

He was known for his exceptional concern with superstitions. For example, he was known to eat only chicken on the day of games; his favorite was lemon chicken. He published a book of chicken recipes, called Fowl Tips.