The longest game in Organized Baseball history occurred in 1981 between the Pawtucket Red Sox and Rochester Red Wings of the International League at Pawtucket's McCoy Stadium and lasted 33 innings. The game began on April 18 and lasted 32 innings before being stopped, with play to resume later in the season. On June 23, the game resumed with it only taking one additional inning to settle the game as Pawtucket won it by a score of 3 - 2 in the bottom of the 33rd inning. The game included future Hall of Famers Wade Boggs and Cal Ripken Jr. as the two third basemen. Bob Ojeda and Marty Barrett also went on to notable careers in the major leagues.

The game started late on a cold and windy Saturday, after the game's first pitch was delayed for thirty minutes as a bank of lights needed to be fixed. The first six innings were a pitchers duel as starters Larry Jones of the Red Wings and Danny Parks of the Red Sox pitched shutouts. In the top of the seventh, Rochester's Chris Bourjos singled home Mark Corey, but then Luis Aponte came in to relieve Parks and shut down the Red Wings. In the bottom of the ninth the score was still 1 - 0 visitors. After a Chico Walker double off the center field wall, a Larry Jones wild pitch, and a Russ Laribee sacrifice fly, the tying run scored and the game went to extra innings.

The game would remain knotted for 11 innings, due to the lights-out performances by both bullpens. Aponte would strike out 9 Red Wings through the tenth, and would be followed by Manny Sarmiento (4 IP), Mike Smithson (3.1 IP), and Win Remmerswaal (3.2 IP). On the other side, Rochester reliever Schneider would nearly match Aponte striking out 8 in 5.1 innings after coming on in the ninth. Steve Luebber would come on in the fifteenth for the Red Wings and pitch 8 innings.

In the top of the eleventh it appeared that the Red Wings would plate a run on a line drive destined for the left field corner but third baseman Wade Boggs saved the game for the Red Sox by stopping it.

Later in the game, in either the fifth or sixth hour, Sam Bowen, the Pawtucket right fielder, hammered a towering fly ball to center that looked like it would end the game. According to Rochester center fielder Dallas Williams:

In the top of the 21st, Red Wings catcher Dave Huppert hit a double, driving in a run giving Rochester a 2-1 lead. Then in the last of the inning, the Red Sox's Wade Boggs hit a double to score Dave Koza to even the score. In the 22nd inning, Pawtucket manager Joe Morgan was ejected from the game by Dennis Cregg for arguing on a bunt call. [1]

By now the game had entered its second day, and according to the International League's rule book a curfew would be enforced that would have suspended the game around 1:00 AM. However, the rule book of home-plate umpire Dennis Cregg was not the updated version and it was missing the provision. Thus the game continued on for 11 more scoreless innings. The final 10 innings for Rochester were pitched by Jim Umbarger, who gave up only four hits and struck out nine. Finch and Bruce Hurst pitched Pawtucket's last ten innings, giving up six hits and striking out six combined.

At 2:00 AM Pawtucket reliever Luis Aponte, who had pitched the seventh through tenth innings, received permission to go home from his manager. However, his wife did not greet him with open arms. Upon his arrival, Xiomara Aponte asked angrily, "Where have you been?" to which the pitcher responded "At the ballpark," to which his wife snapped "Like hell you have." [2] Aponte reasoned that the news of the game would be in the Sunday papers, but its length meant that the game was still ongoing at press time and news of the game was not published until Monday. Aponte reportedly spent both nights on the couch.

At the start of the 30th, the game broke the minor league longest game record which had been set on June 14, 1966 in the Florida State League. In that game at Al Lang Field, the Miami Marlins defeated the St. Petersburg Cardinals 4 - 3, in 29 innings and 6 hours and 59 minutes. As the game wore on into the morning, players began to do anything to keep warm including burning the benches in the bullpens and broken bats in the dugouts. [3]

Meanwhile, Pawtucket general manager Mike Tamburro was attempting to reach International League President Harold Cooper to get a ruling on what to do. Finally, around 3:00 AM, Cooper was reached and ordered the game to be suspended after completion of the current inning. At 4:09 AM on April 19, at the end of the 32nd inning, the game was stopped and would be resumed at a later date. At this point, there were 19 fans left in the seats, all of whom were given lifetime passes to McCoy Stadium by the team's owner, Ben Mondor.

Play resumed on June 23 when the Red Wings returned to Pawtucket. On hand for the resumed game was a sellout crowd of 5,746, as well as 140 members of the press from around the world, and four television networks. In addition to the historic nature of the game, the game attracted attention as the second part was played during the 1981 Major League Baseball player's strike, and the media were eager to cover any baseball. The game required just one inning and eighteen minutes to finish. 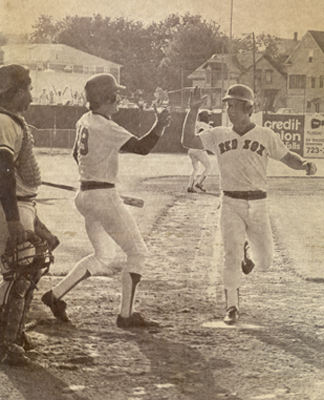 Pawtucket's eighth pitcher Bob Ojeda, was the team's "starting reliever." On the April 18, Ojeda had been unavailable to pitch as he had pitched the night before, on the April 17. Ojeda retired Dallas Williams and then gave up a single to Cal Ripken, Jr. before striking out Floyd Rayford and getting John Valle to hit on a soft fly to left. [4]

Steve Grilli, who had started the season in the Toronto Blue Jays system and was a 70-game veteran of the majors, got the call for Rochester. Grilli preceded to hit Marty Barrett with his first pitch, and then gave up a single to Chico Walker which advanced the runner to third. Russ Laribee was then intentionally walked and another Red Wing entered the game, Cliff Speck, to face the game's leading hitter Dave Koza. After 8 hours and 25 minutes and 33 innings, Koza hit a 2-2 curve ball off Speck into left for a single and drove in Barrett to win the game.

The AAA featured many future big league players. Of the forty-one players who got into the game, 25 went on to play in the major leagues, and among them were two Hall of Famers; Cal Ripken Jr. and Wade Boggs.

Dallas Williams' 0-for-13 line is the all-time single-game record for most at-bats without a hit. The Rochester center fielder also had two sacrifice bunts, to bring his plate appearance count to 15.

No out when run scored