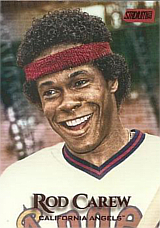 "I get a kick out of watching a team defense me. A player moves two steps in one direction and I hit it two steps in the other direction. It goes right by his glove and I laugh." - Rod Carew

"To all the party people that are on my Bozac, I've got more action than my man, John Woo, and I've got mad hits like I was Rod Carew..." - Mike D, on the Beastie Boys 1994 single "Sure Shot"

Hall of Famer Rod Carew was one of the most prolific hitters for average of his generation. He won seven batting titles and hit over .300 in fifteen consecutive seasons, despite starting his career during the Second Deadball Era). He won the Rookie of the Year Award, the Most Valuable Player Award and was an 18-time All-Star in 19 seasons.

Carew was born on a train in the Panama Canal Zone to Panamanian parents, who named him after the would-be delivering doctor, Rodney Cline; a nurse who actually delivered him in the segregated portion of the train became Carew's godmother. Cline was summoned after Carew was born, and he did eventually become Carew's doctor. He grew up in poverty in Panama with a father who was frequently cruel and abusive to him and his mother. He moved to the United States as a teenager a couple of months after his mother had emigrated to New York City and saved up enough money to bring him. He did not play high school baseball but was spotted playing sandlot ball by a bird-dog named Monroe Katz, who recommended him to scout Herb Stein, who signed him for the Minnesota Twins in 1964.

Seven Batting Titles with the Twins[edit] 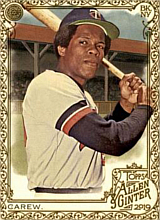 "I taught him how to steal home. That's all I ever taught him. As for hitting, he knew how to do that all by himself." - Twins manager Billy Martin

"There was a point at which I thought I'd never get the MVP, especially the years I played at Minnesota. We never won a pennant there, we were far away from the big media centers of Los Angeles and New York, and I wasn't a flashy power hitter but a guy who hit to spots, who bunted and stole bases." - Carew

Originally a second baseman, Carew spent three years in the minors before reaching the big leagues with the Twins in 1967 as an Opening Day starter. He singled in his first major league at-bat, off Dave McNally of the Baltimore Orioles, and went on to hit .292 in 137 games. He was a starter for the American League in the All-Star Game that summer and was honored as American League Rookie of the Year. After hitting .273 for Minnesota in 1968, he hit .332 in 1969 and won his first AL batting crown. During that season, he stole home 7 times, second only to Ty Cobb's record of 8 in a single season. He also saw his first postseason action, batting just 1-for-14 in the ALCS against the Orioles.

Carew started the 1970 season hot, hitting for the cycle on May 20th against the Kansas City Royals, and batting over .400 through May 26th. A knee injury in June, the only significant injury in his career, caused him to miss three months, costing him another batting title. He came back in late September and ended the year with a .366 average in 51 games. After hitting .307 in 1971, he led the American League in batting in 1972 without hitting a single home run, the only player ever in the American League. This feat has only been accomplished one other time, by Zack Wheat in the National League during the 1918 seaon. On May 12th, he reached base 8 times in a game: he had 3 singles, 2 doubles, and 3 walks in 10 plate appearances as the Twins lost to the Milwaukee Brewers in 22 innings. He was the last major league player to do so until Melky Cabrera matched the feat in 2014.

Carew led all of MLB in batting average for three consecutive years, from 1973 to 1975, becoming only the second player to do so (the other being Cobb). Manager Gene Mauch moved him to first base in 1976, in part due to defensive liabilities and in part to lengthen his career. He hit .331 that summer but finished a close third in the batting race behind Royals teammates George Brett and Hal McRae. In 1977, he had his best overall season, leading the AL with a .388 average, 128 runs scored, 239 hits, and 16 triples. His average was the highest in baseball since Ted Williams hit .406 in 1941; he went over .400 on June 26th, and never dropped below .370 the rest of the season. In July, he appeared on the cover of Sports Illustrated with Williams, and went on to win the AL MVP. He hit .333 in 1978 to win his final batting title but had become bitterly frustrated by Twins owner Calvin Griffith's unwillingness to spend money and the team's inability to keep its young stars, announcing his intention to leave the club when his contract was up. Griffith publicly called him greedy and ungrateful, which was especially rich coming from a penny pincher like him, making a trade inevitable. Prior to the 1979 season, he was sent to the California Angels for four players: Ken Landreaux, Brad Havens, Paul Hartzell and Dave Engle.

Later Success with the California Angels[edit]

"He could move the bat around as if it were a magic wand." - Ken Holtzman 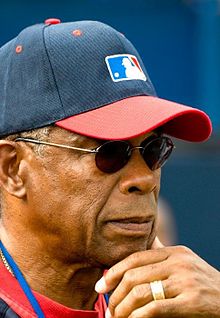 During his career, Carew recorded 3,053 hits and a .328 lifetime batting average, scoring 1,424 runs with a career slash line of .328/.393/.429. He also stole 353 bases, making 17 thefts of home plate. He was elected to the Baseball Hall of Fame on January 8, 1991 by the BBWAA, and his number 29 is retired by the both the Twins and the Angels (having also been inducted to each team's Hall of Fame). In 1999, he ranked Number 61 on The Sporting News list of the 100 Greatest Baseball Players, and was nominated as a finalist for the MLB All-Century Team. He remains a national hero in Panama, and on January 19, 2004, Panama's National Stadium in Panama City, was renamed "Rod Carew Stadium". In 2005, he was named the second baseman on the MLB Latino Legends Team. He was the all-time leader for hits by a player born outside the United States until passed by Ichiro in 2017.

He suffered a massive heart attack while golfing in September 2015 but survived, although he had to undergo six hours of heart surgery and his long-term prognosis was poor without a heart transplant. In December 2016, it was announced that he was in line to receive a heart and kidney transplant in order to relieve ongoing sequels of the heart attack. Following the attack, he had been installed with a ventricular pumping device at the time, as his heart had become too weak to pump blood throughout his body. The surgery was performed on December 16th, and it came out a few months later that the donor was former NFL player Konrad Reuland, who had died of a brain aneurysm a few days earlier at 29. Ironically, Reuland had met Carew when he was just 11. Carew was well enough to attend the pre-game ceremonies for the 2017 All-Star Game in Miami, FL six months later.

At the 2016 All-Star Game, Commissioner Rob Manfred announced that the American League batting title would henceforth be known as the "Rod Carew Award", a fitting tribute to the seven-time winner. Its National League counterpart was named the "Tony Gwynn Award", in honor of Tony Gwynn.

Sometimes a target of racism, Carew received death threats when he announced his intention to marry a Jewish woman. Many sources have long claimed that he converted to Judaism when he married his first wife and, in this sense, he is sometimes compared to Sammy Davis Jr. as a famous "Jewish convert of color"; however, this is incorrect. He has never undergone a formal conversion ceremony nor publicly identified himself as an adherent of Judaism; however, his children were raised Jewish and it is assumed that, as such, he partakes in some Jewish activities such as lighting Hanukkah candles or organizing Passover Seders with his family. Nonetheless, the story about him converting to Judaism is an urban myth. He is named in one of Adam Sandler's Hanukkah Songs as "Hall of Famer Rod Carew!" He is also referenced in the Beastie Boys 1994 single "Sure Shot" with the line "And I got mad hits like I was Rod Carew."

When Carew's 18-year-old daughter, Michelle, fell victim to leukemia, Carew made national headlines again. Her Panamanian-Jewish ethnic mix lowered the likelihood of finding a suitable donor for a bone marrow transplant; in spite of Carew's national pleas, she died in April 1996 before a donor could be located. Through his efforts, the National Marrow Donor Program gained immense exposure and the registry is 10 times larger in 2020 than it was at the time of Michele's passing. The organization's lifetime achievement award was named after Carew.

Carew's first marriage broke up not long after Michele's death and he eventually remarried and adopted his second wife's two children. In September 2015 Carew suffered a heart attack, the kind known colloquially as the "widowmaker". He was fitted with an LVAD (a machine that takes over the blood pumping of the left side of his heart), then in December 2016 he received a heart and kidney transplant. The organs came from Konrad Reuland, a 29 year old (Carew's uniform number) former NFL player who had died due to a burst brain aneurysm. In a twist of fate, Reuland had gone to school with, and in the same grade as, Carew's adopted daughter. When Reuland was 11 he met Carew picking up his daughter from school, and went home telling everyone "Yeah, but did you meet Rod Carew today? I met Rod Carew today!". Carew became very open about his heart problems, encouraging others to get checked for heart disease. Clyde Wright credits Carew's message for getting a checkup, which revealed four nearly clogged arteries.