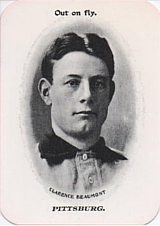 Clarence "Ginger" Beaumont had a strong major league career, playing 12 seasons in the National League, mostly during the dead ball era. He led the league four times in hits, once in runs scored, once in total bases, and once in batting average. Ginger was the first batter in World Series history as the leadoff hitter for the Pittsburgh Pirates in Game 1 of the 1903 Series.

Beaumont was the first major leaguer called "Ginger", a few years before Ginger Clark broke in. He was born in Rochester, WI, and is still (as of 2019) in the top ten of major leaguers with the most hits who were born in Wisconsin (ranking behind Andy Pafko and ahead of Jim Gantner, neither of whom played in the dead ball era). When young, Beaumont was famed for his speed, but a knee injury affected him. He played some semi-pro ball starting in 1896, was at Beloit College in 1898 (at the same time as Doc Adkins and Bob Blewett), and hit well in a short trial in the Western League in 1898 under manager Connie Mack before coming to the majors in 1899. That was the only minor league experience he would have, until he played one more year in 1911 after he left the majors. The New York Evening Telegram of August 31, 1899, reported that Beaumont used the heaviest bat in the league at 55 (!) ounces. Most players used bats that weighed 34-36 ounces.

Ginger was with the Pittsburgh Pirates for most of his major league career, coming up the same year that Jack Chesbro broke in, and one year before Fred Clarke and Honus Wagner came to the team. Beaumont was not really overshadowed on the team by Clark and Wagner - for example, in 1902 his batting average was well above theirs, although his slugging was lower. In 1903, his batting average was fairly close to Clark's and Wagner's, and he had the same number of doubles as Honus but more home runs (although fewer triples than either Clarke or Wagner). In 1905, Honus clearly outdid Ginger, but Ginger's offensive numbers were better than Clarke's. Ginger was traded when he reached 30 to the Boston Beaneaters, for whom he hit .322 in 1907, leading the league again in hits. His hitting was by far the best on the team.

After baseball, he was a farmer. He suffered two strokes in his seventies and died at 79 in Burlington, WI.

One of the sources: SABR biography of Ginger Beaumont.