Gene Mauch played nine years in the majors, mostly as a second baseman, and then managed in the majors for 26 years.

Gene made his major league debut in the World War II year of 1944, as an 18-year old middle infielder, playing five games for the Brooklyn Dodgers. He then entered the military service in May, missing the rest of 1944 and all of 1945. After nine seasons as a journeyman middle infielder and three seasons as a player-manager in the minor leagues, Gene Mauch went on to manage four major league clubs. His record in his short time in the minors was outstanding, as he won the American Association playoffs at the helm of the Minneapolis Millers in both 1958 and 1959.

In 1961, in his second year as a major-league skipper, he managed the Philadelphia Phillies to only 47 wins while losing, at one point, 23 games in a row. Yet, by the next season, 1962, they had a winning record - thanks in part to the addition of two expansion teams in the National League. In 1964, he led the Phillies to a second place finish, after leading the National League for most of the year only to see his team collapse in the last week of the season and be overtaken by the St. Louis Cardinals. He was widely criticized for shortening his pitching rotation during the last two weeks of that season, pitching Jim Bunning and Chris Short repeatedly on short rest as the Phillies lost ten consecutive games to fall out of first place. He also clashed with slugger Dick Allen during the following years as the Phillies sank into mediocrity, but he wouldn't be the only manager to have difficulty with the moody superstar. For all that, the Phillies had a winning record every season from 1962 to 1967 and were 28-27 when he was fired on June 16, 1968. They would rapidly tumble into the National League cellar after his departure. 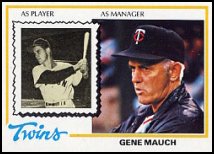 Mauch was the first manager of the Montreal Expos, who lost 110 games in their inaugural season, 1969, including another epic losing streak, this lasting 20 games. Once again, he built from that very poor start, and in 1973, he had the team in the middle of a tight pennant race in the NL East until the last days of the season, a performance which won him the Manager of the Year Award. He was fired after the 1975 season, when the team's plans to build on pitching, speed and defense led the Expos back to a last-place tie with the Chicago Cubs. He was immediately hired by the Minnesota Twins, whom he got into another unlikely pennant race in 1977 until the Kansas City Royals managed to pull away in September to win the division title. In both Montreal and Minnesota, a lot of his success was based on his use of ace relief pitcher Mike Marshall who had some tremendous years for him. He was also known as an enthusiastic proponent of small ball tactics, particularly the sacrifice bunt and the hit-and-run, and starting in the mid 1970s, the stolen base, in addition to his aggressive use of substitutions and relief pitchers. He was often accused of "over-managing", although one must admit that he also over-achieved with some teams that were not obviously destined for greatness.

Gene Mauch achieved his greatest success with the California Angels, however, winning division titles in 1982 and 1986. Team owner Gene Autry fired Mauch after the Angels lost the 1982 Championship Series to the Milwaukee Brewers after taking a 2-0 lead. Autry soon regretted his decision and hired Mauch back in time for the start of the 1985 season. In both 1982 and 1986, the team came within one win of the World Series. In the 1986 ALCS, he took some heat for the Angels' failure to put down the Boston Red Sox with a lead in the 9th inning of Game 6, although he did not make any obvious managerial blunders during that fateful game: he took out his starter Mike Witt when he showed signs of fatigue, and had his closer Donnie Moore on the mound for Dave Henderson's memorable two-strike, two-out, two-run game-tying home run. He then managed an aging Angels team to a sixth-place finish in 1987 and was slated to lead the Angels again in 1988 but retired in spring training because of health concerns, leaving the team scrambling to replace him with coach Cookie Rojas. He did continue to work in the Angels' front office for a number of years thereafter. He died of cancer on August 8th, 2005.

In 2004 he was elected to the Pacific Coast League Hall of Fame. He was the brother in-law of Roy Smalley Jr. and the uncle of Roy Smalley III, who played for him in Minnesota, and of Harry Mauch, a minor league outfielder in 1978 and 1980.