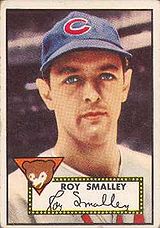 The father of Roy Smalley III, shortstop Roy Smalley played parts of eleven seasons in the majors, mostly with the Chicago Cubs.

Smalley was signed by the Cubs in 1944 and began his pro career that summer with the Los Angeles Angels of the Pacific Coast League. After missing the next season while serving in the U.S. Navy during World War II, he returned to baseball in 1946 and spent 1947 with the Des Moines Bruins of the Western League.

Smalley reached the majors with Chicago in 1948 as the team's Opening Day shortstop. He hit below .200 for much of the summer, ending the year with a .216 average in 124 games. In 1949, he improved to .245 with 10 triples and 8 home runs. The next season, he led the National League with 114 strikeouts and 51 errors; that makes him the most recent player to have 50 or more errors in a season. Nonetheless, that year he had his most productive summer at the plate, hitting 21 homers and driving in 81 runs for the Cubs. He was a regular for Chicago for three more seasons after that.

With Ernie Banks taking over as the Cubs' shortstop, Smalley was traded to the Milwaukee Braves for Dave Cole prior to the 1954 season. However, he played in just 25 games for the Braves that summer. His contract was then purchased by the Philadelphia Phillies before the 1955 campaign, and he played 186 games for the team over the next four years.

After his big league days, Smalley played several more seasons in the minors. In 1961 and 1962, he managed the Reno Silver Sox of the California League, winning a league championship in his first season at the helm.

Smalley had a deformed middle finger on his right hand. He was a frequent target of abuse for Chicago writer Mike Royko, who said that he "is a Cub legend today because of the way he used to snatch up ground balls and fling them at the sun." His work with Eddie Miksis led to the saying "Miksis to Smalley to Addison Street," an unfavorable comparison to the famous double play exploits of a former Cub infield combination.

Smalley was married to the sister of big league player and manager Gene Mauch, Jolene.