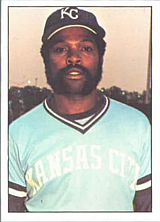 The father of Brian McRae, Hal McRae was his son's manager with the Kansas City Royals from 1991 to 1994. Unfortunately for McRae, many younger fans remember him for his famous 1993 tirade against the media during which he ranted and raved before throwing a telephone and bloodying the face of a reporter.

He was the first player to make his career essentially as a designated hitter. Originally an outfielder with the Cincinnati Reds, a multiple leg fracture sapped his speed and a shoulder injury took away his throwing arm. He found a home as the DH of the Royals for a number of seasons, dealt with Wayne Simpson to Kansas City in exchange for Roger Nelson and Richie Scheinblum in 1972. He was still a part-time outfielder for the Royals from 1973 to 1975, but he really thrived after becoming a full-time DH, even leading the American League in RBI in 1982 (winning a Silver Slugger in the process) and finishing second in the batting race to teammate George Brett in 1976.

In addition to stints as skipper of the Royals and Tampa Bay Devil Rays, McRae has also been hitting coach for the Montreal Expos, Cincinnati Reds, Philadelphia Phillies and the St. Louis Cardinals, with whom he won a ring in 2006.

In 1989, Hal was inducted into the Kansas City Royals Hall of Fame. That winter, he played for the Bradenton Explorers of the Senior Professional Baseball Association. He hit just .171 in 13 games with the team.