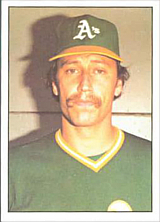 Pitcher Ken Holtzman was selected by the Chicago Cubs in the fourth round of the 1965 amateur draft, the inaugural first-year player draft. He was the first drafted player to make it to the majors when he made his big league debut that September. He was later traded for Rick Monday, who was the first player selected in that inaugural draft.

Holtzman's homer in the 1974 World Series was the last long ball by a pitcher in a World Series in the 20th Century. It would be 34 years until Joe Blanton was the next. It was also the last time a pitcher had homered in an American League park until Shohei Ohtani did so in a start on April 4, 2021, in a game in which his team declined to use the designated hitter. Ironically, he was also one of the few AL pitchers to bat in a game because his team declined to use the DH: it came in his last start of the year on September 27, 1975, against the California Angels, and it was in preparation for a possible return to the World Series (the A's eventually lost the ALCS to the Boston Red Sox); he went 0 for 2 in the game, and the A's also used Rollie Fingers as a pinch-hitter for the pitcher later in the game.

He is the winningest Jewish pitcher in baseball history, with 174 career wins. Sandy Koufax is second with 165.

In 2007, Holtzman was hired to manage in the inaugural year of the Israel Baseball League.