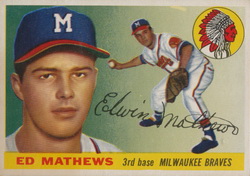 Inducted into Hall of Fame in 1978

"I've only known three or four perfect swings in my time. This lad has one of them." - Ty Cobb

Eddie Mathews is often considered the best third baseman in baseball history prior to the time of Mike Schmidt. Even in a comparison with Schmidt, Mathews comes close with an Adjusted OPS at 143 that is only four points away from Schmidt, and good defensive range during his career at third base. Eddie was a handsome slugger on some great Braves teams, and also made himself into a fine third baseman. He hit over 40 home runs four times in his career, and over 500 lifetime. 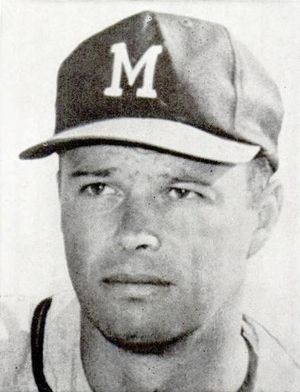 It has often been pointed out that Mathews, although famed for his home run hitting, nevertheless played in the shadow of his teammate Hank Aaron. Mathews had his biggest home run year at age 21, the year before Aaron came up, and although he played in three World Series, did not have his best years in any one of those three seasons. Mathews never won an MVP award, although he was second twice in the voting.

However, Mathews is remembered as the player who redefined the third base position. For decades, third base had been the orphan position, with lesser players often relegated to playing there. There were few third basemen in the Hall of Fame prior to the time of Mathews (although there were occasional good players such as Ken Keltner and George Kell). Mathews created an image of the third baseman as both a top slugger and a defensive stalwart, something that the generations of third basemen after Mathews have struggled to achieve.

He was the only member of the Hall of Fame from Santa Barbara County, California. He grew up in the city of Santa Barbara, CA and was an outstanding athlete at Santa Barbara High School, Class of 1949.

Mathews was the only player to play for the Braves in Boston, Milwaukee, and Atlanta. However, he finished his career with half a season with the Houston Astros and a year and a half with the Detroit Tigers, with his final big league appearance coming in the 1968 World Series for the Tigers. He later managed the Braves for two and half seasons, from 1972 to 1974.

He was elected to the Baseball Hall of Fame on January 19, 1978 by the Baseball Writers Association of America.

"Mathews is just as strong as Mantle. They don't hit the same - Mantle gets all his weight into his swing; Mathews uses his swing more, like Ted Williams." - Warren Spahn, 1953