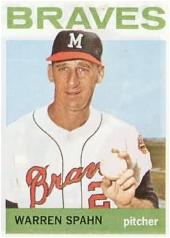 Warren Edward Spahn
(Hook or The Invincible One)

Undeniably one of baseball's greatest pitchers,Warren Spahn pitched 21 seasons in the major leagues, winning 363 games, and won at least twenty games 12 times -- the last at age 42! His win total is 6th on the all-time list, and the highest by a lefthander. He was elected to the Baseball Hall of Fame on January 24, 1973 by the Baseball Writers Association of America.

He likely would have been inducted into the Hall with the class of 1971 but Spahn pitched with the Mexico City Tigers of the Mexican League in 1966 and Tulsa of the Pacific Coast League in 1967. The Hall of Fame considered him an active player, thus delaying his eligibility by two years.

Spahn broke in as a 21-year-old rookie with the Boston Braves in 1942. He probably would have won far more games than he did had he not lost several years to World War II. He served in the U.S. Army and participated in the battle for the bridge at Remagen. He was awarded a purple heart (wounded in action) and a bronze star (conspicuous bravery under fire) during his military career.

He came back to the majors for 24 games in 1946, and for his first full season in 1947, at the age of 26. He continued to pitch in the majors through 1965, when he was 44 years old. His first 20 seasons were spent pitching with the Braves, first in Boston and then in Milwaukee. He split his final season between the New York Mets and San Francisco Giants.

A popular mantra in Boston in 1948 was "Spahn and Sain, then pray for rain." It implied that the other starting pitchers were inept and the only chance the Braves had of winning was with Spahn or Johnny Sain on the mound. However, other Braves pitchers did indeed contribute to the pennant-winning effort.

He was the winner of 363 games, the most of any lefthander in history. He added a screwball to his pitching style after his fastball left him. He led the league in strikeouts four times. He was a twenty-game winner 13 times, extremely consistent. Amazingly, he kept on into his forties, and at age 42 was a remarkable 23-7. He also was tops in complete games many seasons, and it helped that he was a pretty good hitter! In his career, he had 363 hits - exactly one for each of his wins as a pitcher. That held for all three franchises for which he pitched (i.e. he had 356 wins and as many hits for the Braves, 4 hits and 4 wins for the Mets, and 3 wins and 3 hits for the Giants). He leads by a wide margin all pitchers with an equal number of wins and hits, with Dick Ruthven next at 123.

Spahn also managed at Tulsa for five years, and had substantial success in 1968 when his team went 95-53. Spahn was the pitching coach for the Cleveland Indians during the mid-1970s.

He had a ranch in Oklahoma. The Oklahoma Sports Museum gives out an annual Warren Spahn Award to honor the best lefthanded pitcher in the major leagues.