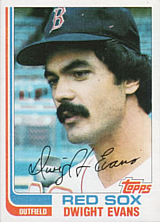 Dwight Evans was drafted out of Chatsworth High School in California in 1969. This same high school would later produce both Mike Moustakas and Matt Dominguez who were the highest ranked high school teammates drafted together in the first round in 2007. Evans was one of the finest defensive right fielders of his time, winning eight Gold Glove Awards (1976, 1978, 1979 & 1981-1985) despite playing in Fenway Park, one the toughest right fields in the majors. His throwing arm was among the best in baseball during his prime. Evans played for 20 seasons, and became a power hitter the second half of his career. He was known for hitting home runs from the leadoff spot, having a high OBP and being a clutch hitter.

Evans played 19 seasons for the Boston Red Sox and his last season with the Baltimore Orioles. He suffered a horrible beaning on August 28, 1978 at the hands of the Seattle Mariners' Mike Parrott. He batted in the Hriniak/Lau style, with a low, flat swing. He held the bat pointing nearly at the catcher, then whipped it through the strike zone. He was considered a great defensive right fielder during most of his peak with a very strong arm, although he was not a large, strong man like Jesse Barfield or Vladimir Guerrero. Evans played some first base and DH at the end of his career. Very patient at the plate, he would have been very successful as a modern Beane/Epstein type of player.

Dwight Evans played in the 1975 and 1986 World Series, where he was a combined .300 hitter in all 14 of those games, hitting 3 homers and driving in 14 runs. During the 1975 World Series, he made a twisting, turning, falling catch in Fenway Park that for many years was replayed as a highlight before other televised Red Sox games. He started the 1986 season with a leadoff home run off Jack Morris of the Detroit Tigers in Tiger Stadium, and always came across as a classy, smart, and professional player.

Although Evans did not do well in the BBWAA voting for the Hall of Fame, his chances with the Veterans Committee may be better. His first consideration by the Committee will come as part of the 2020 all of Fame Election when he will be one of ten candidates under consideration from the "Modern Baseball" period (1970-1987). Of the most similar players to Evans (based on the similarity scores method), three of the top six are in the Hall of Fame - Billy Williams, Tony Perez, and Al Kaline -, and others in the top ten may get in eventually. Since Evans won 8 Gold Gloves, he has significant defensive credentials on top of his 385 home runs, 1,384 RBI and 1,470 runs scored. He also ranks 25th on the all-time list for walks, and has the 10th most career home runs hit by an American League right-handed batter.

After his playing career ended, Evans was a member of the Colorado Rockies coaching staff in 1994. On December 11, 2001, he returned to the Red Sox as the major league hitting coach, and spent 2002 on the Red Sox staff. Evans currently serves as a player development consultant with the team. In 2000, the Red Sox inducted him into the team's Hall of Fame.

Evans' grandson, Ryan Berardino, was drafted in the 34th round of the 2019 amateur draft.

Evans played a bit part in the 2011 comedy Hall Pass, as the father of Jenna Fischer's character.