Note: This page links to Billy Beane, the current Oakland Athletics general manager. For the former major leaguer who acknowledged his homosexuality in 1999, click here. 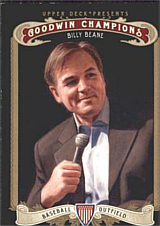 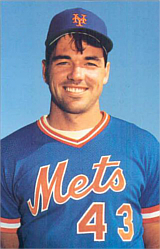 Billy Beane was selected by the New York Mets in the first round of the 1980 amateur draft. He never lived up to the hype as a player, but today is best known for being the controversial general manager of the Oakland A's and the focus of the also-controversial Michael Lewis book (later Oscar-nominated film) Moneyball. He earned his B.A. in Economics at the University of California, San Diego (UCSD).

Beane manages a small-market team and must operate on a budget. His modus operandi is to build the team via the draft and trades and to eschew free agents. This has led to short-term complaints when he has elected not to re-sign popular players such as Jason Giambi and Miguel Tejada, or when he traded Mark Mulder and Tim Hudson. Nonetheless, few can argue with the success the A's have had under his stewardship.

Beane was born in Florida and attended high school and college in San Diego. After being selected in the first round of the draft in 1980 by the New York Mets at 18, he spent most of the 1980s in the minors. He was not a particularly good hitter in the low minors, but in 1984, his second year at Jackson in Double A, he hit 20 homers with a .281 average. From 1985 to 1987, he was in Triple A for part of every season and hit between .280 and .300 each year, although with gradually slipping slugging percentages. The highest, in 1985, was .480.

In the majors, he had few at-bats in four of his six seasons. His chief year was 1986 with the Minnesota Twins, when he appeared in 80 games with 183 at bats, both of which comprise more than half his career totals. An outfielder who also played a bit of first, third, and catcher, his .213 batting average in 1986 was not nearly enough to win a job, nor was his .295 slugging percentage. In 1989, he played 37 more games with the Oakland Athletics, a year in which Oakland won the World Series under the managerial leadership of Tony LaRussa. Key players were Jose Canseco, Mark McGwire, and Rickey Henderson, and being around them probably was a great influence on Beane's later approach to dealing with big stars.[citation needed]

Beane started in the front office of the A's in 1990, was a scout in 1992-1993, and by 1997 was the GM. He is known for paying close attention to sabermetrics. Beane has had a high profile as GM. Rob Neyer once wrote an article asking if Beane was on his way to the Hall of Fame, fully cognizant that there are few GMs in the Hall. Some call his style "Beane Ball". His big success in 2006 was Frank Thomas. Thomas, after having two injury-plagued seasons in 2004 and 2005, was deemed expendable by the Chicago White Sox. The A's were able to sign him for a mere $500,000 plus incentives. Thomas, who was unable to play during most of spring training, had to use major league games in April as his form of spring training, and thus started very slowly. But he led the A's in both on-base percentage and slugging percentage and earned $1.5 million in incentives for his play that year. The A's won the AL West title in large part due to Beane signing "The Big Hurt".

The Athletics' own website calls him "progressive and talented", and notes he has a .565 winning percentage - and also notes that in the last six seasons his winning percentage is even higher at .588. Players under his watch have won two MVP awards, one Cy Young Award, and one Rookie of the Year award. Beane does not ignore the minors - his teams in the minors played at a .545 clip in 2005. The website continues to note that Beane has been very active in making trades before the trading deadline, and that his teams do even better after the deadline. He was the Sporting News Executive of the Year in 1999, and won Baseball America's 2002 award as Major League Baseball's Executive of the Year.

After an unexpected last-place finish by the Athletics in 2015, Beane was promoted to Vice-President in charge of baseball operations and his assistant GM, David Forst, took over at GM. Beane had lost a number of senior assistants who had been hired by other teams over the years and did not want the same thing to happen to Forst. He also wanted to step away from the daily grind of the GM job to concentrate on more long-term issues related to the franchise. In 2018, he was named the initial winner of the official Major League Baseball Executive of the Year Award (both the Sporting News and Baseball America had sponsored a similar award for years before that). It was in recognition of his turning around the A's from a last-place team in 2017 to being a wild card team that season.