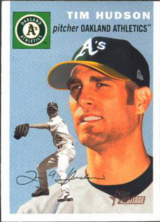 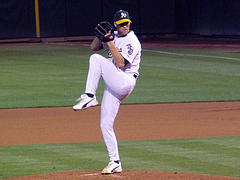 Tim Hudson was a two-way star at Auburn University where he not only led them on the mound but at the plate as well. He played the outfield when not pitching. While attending Auburn, he majored in health promotion and was the Southeastern Conference Player of the Year in 1997.

"Mini Pedro", as his teammates nicknamed him in 2000, saw his bullpen lose 20 leads between 2002 and 2005. In 2000, he became only the seventh man to start his career with 20 wins in his first 24 decisions. He was a member of Oakland's Big Three, along with Barry Zito and Mark Mulder.

Hudson found a second wind to his career following the injury, as he had one of his very best seasons in 2010, with a record of 17-9, a 2.83 ERA (his lowest since 2003) in 228 2/3 innings, his highest total since his years in Oakland. He followed that with back-to-back 16-win seasons, 16-10 in 2011 and 16-7 in 2012. On April 30, 2013, he recorded the 200th victory of his career in beating the Washington Nationals, 8-1. In a typical performance, he gave up only three hits in seven innings, but he also hit the third homer of his career to mark the special occasion. He was only the third active pitcher to reach the win mark, joining Roy Halladay and Andy Pettitte, both of whom retired after the season. His homer came with an assist from Washington LF Bryce Harper, as the ball only cleared the fence after bouncing off Harper's glove and the top of the outfield wall at Turner Field. Remarkably, he was not the first to hit a homer in his 200th win, as Hall of Famer Bob Lemon had done so as well. On July 24th, he suffered a gruesome ankle injury in a first-base collision with the New York Mets' Eric Young. He ran to cover first base on a routine play in the 8th but Young accidentally stepped on his ankle, causing a painful fracture and ending his season. The 8-2 win, which improved his record to 8-7, 3.97, was little consolation. After the season, he became a free agent and on November 18th signed a two-year deal with the San Francisco Giants worth a reported $23 million.

Hudson was a winner in his first start for the Giants, pitching 7 2/3 scoreless innings against the Arizona Diamondbacks on April 2nd and getting credit for the 2-0 win. He went 9-13, 3.57, in 31 starts for San Francisco and was selected to start Game 2 of the NLDS against the Washington Nationals. In a coincidental twist, Hudson became the starter for the two longest games in postseason history. On October 9, 2005, he started Game 4 of the NLDS for the Atlanta Braves against the Houston Astros. That game endured until Chris Burke homered to end it in the bottom of the 18th inning for a 7-6 Houston win; Hudson gave up 3 runs in 7 innings that day. In his Game 2 start on October 4th, he gave up one run in 7 1/3 innings and the game again went 18 innings, when Brandon Belt homered to give the Giants a 2-1 win. When the Giants won the series in four games, it was the first time in seven postseason appearances that Hudson was on the winning side in a Series: Oakland had lost in the first round each year from 2000 to 2003, and the Braves lost at the same stage in both 2005 and 2010. He was also a member of the Braves in 2012, when they lost the Wild Card Game, but he did not appear in the game. When he started Game 3 of the 2014 World Series against the Kansas City Royals on October 24th, he became the third-oldest man ever to make his first World Series start, at 39 years of age, after Jack Quinn in 1929 and Jamie Moyer in 2008. He pitched well that day, but was a 3-2 loser as the Royals managed to score three times on only four hits in 5 2/3 innings. The Giants ended up winning the Series in seven games, giving Hudson his only championship ring.

In January of 2015, Hudson underwent surgery to remove bone spurs from his right ankle, but was confident that he would be ready for Opening Day. He went 8-9, 4.44 in 24 games for the Giants, including 22 starts; he missed most of July and all of August because of separate stints on the disabled list both caused by a strained right shoulder. He announced during the season that he would be retiring at the end of the year and made his final start on October 1st, losing 3-2 to the Los Angeles Dodgers.

He first became eligible for the Hall of Fame in 2021 and while he stood almost no chance of making it to Cooperstown, he did manage to clear one first hurdle in the initial vote, gathering 5.2% of the vote to remain on the ballot for at least another year, but in 2022, he received just 12 votes or 3.0% and fell off the ballot.