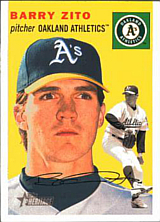 Barry Zito was a star left-handed starting pitcher for the Oakland Athletics through the 2006 season, with a career winning percentage of .618. He signed with the San Francisco Giants as a free agent for the 2007 season, only to see his performance decline with the switch in bay teams.

He started his college career at UC-Santa Barbara before transferring to LA's Pierce College so he could be draft eligible a year sooner. He decided to play one more year of college ball after Pierce and transferred to USC.

Zito made his major league debut with the Oakland Athletics in 2000. He was a two time All-Star, and won the 2002 American League Cy Young Award, compiling a record of 23-5. He was the only member of Oakland's Big Three (Zito, Tim Hudson and Mark Mulder) to win the award. 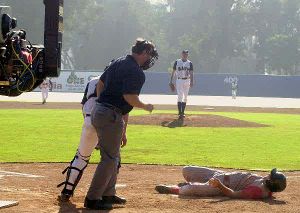 Zito during the filming of JAG

Zito is known for his laid-back demeanor and love of guitar playing and surfing as much as he is for his nasty curveball. He made his acting debut in 2003, guest starring on an episode of the TV show JAG. For a time, he dated actress Alyssa Milano before settling down and marrying a former Miss North Carolina in 2012.

After signing as a free agent with San Francisco before the 2007 season, Zito was the highest-paid pitcher in baseball history. Johan Santana surpassed him in 2008 when he signed a contract extension with the New York Mets.

After posting a disappointing 11-13 record with a 4.53 ERA with San Francisco in 2007, Zito began 2008 with a 0-6, 7.53 record. He was only the third pitcher since 1956 to go 0-6 before May, following Dave Stewart (1984) and Mike Maroth (2003). The Giants announced they were moving Zito to the bullpen for a time, but then turned around and gave him another start on May 7th, which he lost to fall to 0-7. He became the first Giants pitcher since Bill Clarkson in 1927 to lose his first 7 starts. When Zito, whose team scored just 9 runs in those 7 starts, was asked how he dealt with such a poor record, he replied "I don't deal with it. It's out of my control." After a no-decision and an 8th loss, Zito finally won in his 10th start of the season, going 6 1/3 innings in an 8-2 win vs. the Florida Marlins. After that awful start to his season, he settled down a bit, ending the year at 10-17, 5.15 in 180 innings. He walked 102 batters, 3rd most in the league. With his large contract making him untradeable, he continued to take his turn in the Giants' starting rotation in 2009. He did a lot better that year, going 10-13 with a creditable 4.03 ERA (a 106 ERA+) in 33 starts. He was back in the Giants' starting rotation in 2010 and got off to a strong start, winning his first five decisions. On July 16th, he beat the New York Mets, 1-0, pitching 8 scoreless innings, to raise his record to 8-4, but everything went completely downhill after that. He lost 10 of his last 11 decisions to finish 9-14; his ERA was 3.76 in the first half, but 4.70 in the second half. He did pitch better than his second half record showed, but was a victim of poor run support. Nonetheless, he was kept off the Giants' roster for the postseason, and while he did win a ring when the Giants beat the Texas Rangers in the World Series, his contribution to the triumph was minimal. He later admitted that being left off the playoff roster hurt him badly and that he was rooting against his own team as a result, as he was not in a good mental head space at the time. 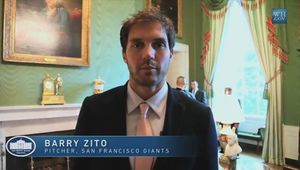 Zito was named the Giants' fourth starter going into the 2011 season, in order to limit the number of starts by young Madison Bumgarner, who had outpitched Zito by a wide margin in the second half of the previous season. On the evening of March 30th, the eve of Opening Day, he was involved in a serious car accident in West Hollywood, CA, when his car was sideswiped by another. Badly shaken up, he was taken to Cedars Sinai Hospital for tests, but was found to have escaped injury. He made his season debut as scheduled on April 3rd, facing the Los Angeles Dodgers. On April 16th, he suffered a sprained foot while fielding a bunt in a game against the Arizona Diamondbacks. He was placed on the disabled list for the first time in his career, after making 356 consecutive starts. He returned to action on June 28th, pitching the Giants to a 6-3 win over the Chicago Cubs in the second game of a doubleheader. He pitched quite poorly after that, and when Jonathan Sanchez, whose spot he was occupying in the starting rotation, was ready to come back from the DL on August 1st, the Giants returned Zito to the DL, claiming his foot was still bothering him. He finished the year at 3-4, 5.87, in only 13 appearances.

The 2012 season started on a much better note for Zito, as he pitched his first shutout in 9 years in his first start of the season, a four-hitter over the Colorado Rockies on April 9th. He went on to have his best season as a Giant, with a record of 15-8 in spite of a 4.15 ERA (good for an ERA+ of only 84 in the low-scoring environment that is AT&T Park). He pitched 184 innings, racking up 114 strikeouts. Still, his performance was most welcome with long-time ace Tim Lincecum struggling all year, and he was in the starting rotation for the NLDS. He was chased early from his Game 3 start against the Cincinnati Reds, but was given the ball again in Game 5 of the NLCS, with the Giants facing elimination against the St. Louis Cardinals on October 19th. Zito pitched a tremendous game, holding the Cardinals scoreless through 7 2/3 innings and contributing an RBI on a bunt single as the Giants won, 5-0. Following that superlative performance, he was assigned to start Game 1 of the 2012 World Series on October 24th, facing fellow former Cy Young Award winner Justin Verlander of the Detroit Tigers. He had another excellent start, giving up a single run 5 2/3 innings to lead the Giants to an 8-3 win.

Zito had another great performance in the Giants' 2013 home opener on April 5th, holding the Cardinals scoreless on three hits and three walks through seven innings, before turning the ball over to the bullpen. The Giants won, 1-0, with Zito getting credit for the win. It was the 15th straight game started by Barry that the Giants had won, dating back to the previous year and including his three postseason starts. The rest of the season wasn't so great; Zito went 5-11, 5.74, in 30 games and after the season, the Giants bought out his option, making him a free agent.

Zito sat out the 2014 season but in February of 2015, he signed a minor league contract with the Oakland A's, accompanied with an invitation to spring training. He did not make the team and spent the entire season with the AAA Nashville Sounds, going 8-7, 3.46 in 24 games, including 22 starts. When the Pacific Coast League season ended, he figured his career was over, as he did not intend to return for another season, but on September 16th, the last-place A's, in a nice gesture, called him up to Oakland for the remainder of the season, giving him a chance to end his career as a major leaguer. He took the place on the roster of Jesse Chavez, who was placed on the 60-day DL because of a season-ending broken rib. He made his return to a big league mound on September 20th when he gave up 2 runs in an inning of relief against the Houston Astros. His final big league start, September 26, saw him duel former Big 3 mate Tim Hudson (now with the Giants), with Mark Mulder in attendance.

After his retirement, he settled down in Nashville, TN with his wife and two children and pursued his other passion, music. He released his first EP, No Secrets, in 2019, shortly before publishing his autobiography, entitled Curveball.