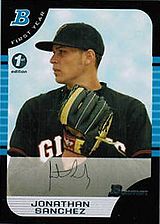 Jonathan Sanchez set school records at Ohio Dominican University for strikeouts in a game (16), season (105) and career (311). He helped the school to the NAIA College World Series three years in a row. Sanchez was drafted by the San Francisco Giants in the 27th round of the 2004 amateur draft. He was signed by scout Sean O'Connor and made his pro debut that summer.

Hard-throwing lefthander Sanchez was hampered by control problems after reaching the majors with the San Francisco Giants early in 2006. He posted ERAs over 5.00 in both 2007 and 2008, the first year as a reliever, and the second as a full-time starter. His strikeout rate of 157 batters in 158 innings as a starter was excellent, but he would consistently walk a batter every two innings, creating trouble for himself.

Sanchez put it all together on July 10, 2009 when he threw a no-hitter against the San Diego Padres, winning 8-0. Only an error by third baseman Juan Uribe prevented him from recording a perfect game. He became only the second native of Puerto Rico to throw a no-hitter in the majors, after Juan Nieves.

In 2010, Sanchez was part of the Giants' first World Series-winning team in San Francisco, combining with Tim Lincecum, Matt Cain and Madison Bumgarner to form an outstanding starting quartet. He struck out over 200 batters that year. In 2011, he missed part of the year with injuries, and when he was healthy, was caught in a numbers crunch as Ryan Vogelsong emerged as another top starter. In 19 starts, he went 4-7, 4.26. After the season, he was traded to the Kansas City Royals along with minor leaguer Ryan Verdugo in return for OF Melky Cabrera on November 7th. While Cabrera had an All-Star first half for the Giants and came back to KC to win to win the All-Star Game Most Valuable Player Award, Sanchez struggled badly for the Royals. He was 1-6, 7.76 in 12 starts, having walked more batters than he had struck out, when he was designated for assignment on July 17th. Three days later, he was traded to the Colorado Rockies in return for another pitcher who had badly underachieved this season, Jeremy Guthrie.

Sanchez signed with the Pittsburgh Pirates for the 2013 season and made the team out of spring training thanks to injuries to Francisco Liriano, Jeff Karstens and Charlie Morton. On April 27th, he was handed a six-game suspension and a fine for throwing at St. Louis Cardinals batter Allen Craig in the 1st inning of a start a day earlier. He had given up a pair of home runs and a single before hitting Craig in the shoulder and was immediately ejected by umpire Tim Timmons, as was his manager, Clint Hurdle, when he came out to argue the decision. He lasted only five games for Pittsburgh and was 0-3 with a 11.85 ERA, allowing 25 hits (7 home runs) and 8 walks in 13 2/3 innings.