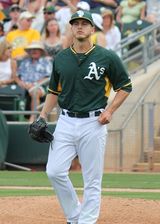 Pitcher Ryan Verdugo reached the majors with the Kansas City Royals in 2012.

A Washington state "Mr. Baseball" as a high schooler, Verdugo was selected by the Philadelphia Phillies in the 43rd round of the 2005 amateur draft. He had fanned 73 in 43 innings as a high school senior. After undergoing Tommy John surgery, he went on to play college ball at Skagit Valley College and had a 7-2, 2.74 record in 2007. He was taken by the San Francisco Giants in the 47th round of the 2007 amateur draft. He did not sign, opting to transfer to Louisiana State University, where he was 9-4 with a 4.12 ERA as a junior. He was second in the Southeastern Conference in wins and was again drafted by the Giants, this time in the 9th round of the 2008 amateur draft. The scout was Andrew Jefferson.

Following the 2011 season, he was traded along with Jonathan Sanchez to the Royals for Melky Cabrera. After beginning 2012 with the AAA Omaha Storm Chasers, he was called up to the majors in early June when Will Smith was sent down. Only on the Royals' roster for a few days, he was sent back down when Clint Robinson was brought up, without having been used in a game. He was called back up to the Royals on July 17th, ironically to replace the just-released Sanchez, and made his first major league start that evening. At the time, he had a 6-2, 3.58 record for Omaha with a .217 opponent average but 44 walks in 88 innings. Facing the Seattle Mariners, he gave up 6 earned runs over 1 2/3 innings and took the loss. After being hard to hit in the minors, he surrendered 8 hits, the big blow being a three-run double by Kyle Seager. Vin Mazzaro wound up relieving him. He was then sent back to AAA and Francisley Bueno was called up to replace him. It turned out to be his sole appearance in the majors.

On October 7, 2018, pitching for the Uni-President Lions of the Chinese Professional Baseball League, he pitched a nine-inning perfect game against the Chinatrust Brothers. The game was still scoreless after he had recorded his 27th out, but teammate Fu-Lin Kuo hit a walk-off homer in the bottom of the 9th to give him the win. It was the first perfect game in CPBL history.