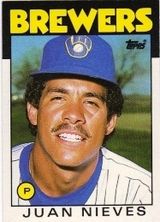 Nicknamed "Juanchi", pitcher Juan Nieves went 19-1 with a 1.05 ERA in his career at Avon Old Farms High School in Connecticut. After graduating, he was signed by the Milwaukee Brewers in 1983 and scouting supervisor Ray Poitevint, scouting supervisor Felix Delgado and scout Tom Bourque.

Nieves was a mainstay in the Brewers' rotation from 1986 to 1988. On April 15, 1987, he threw a no-hitter against the Baltimore Orioles, becoming the second-youngest player in major league history to throw a no-no and so far the only Brewer to do so. However, his promising career was cut short when he suffered an arm injury the following season.

Nieves was a pitching coach in the New York Yankees organization from 1992 to 1996 and filled the same role in the Chicago White Sox chain from 1999 to 2007. In 2008, he was named the White Sox bullpen coach, working under respected pitching coach Don Cooper, staying in the position until the end of the 2012 season. In 2013, he was hired by the Boston Red Sox to be the pitching coach under new manager John Farrell. After an outstanding first season, in which the Red Sox set a team record for strikeouts and won the 2013 World Series, his charges struggled badly in 2014. He was fired by the Red Sox on May 7, 2015 with the team 2 games under .500. He was named pitching coach for the Miami Marlins for the 2016 season and stayed until the end of 2018. Nieves was scheduled to be pitching coach of the Toledo Mud Hens in 2020 before the season was cancelled due to Covid-19. In 2021, he was named assistant pitching coach of the Detroit Tigers.

Away from the diamond, Nieves played the role of "Fransisco Delgado" in the 1999 movie For the Love of the Game.