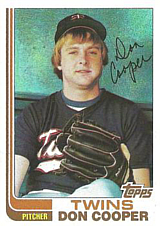 "I love being part of young people’s lives helping them achieve the dreams they’re dreaming about. That’s what I’m into." - Don Cooper, to the Chicago Sun-Times, 2018

Pitcher Don Cooper was selected by the New York Yankees in the 17th round of the 1978 amateur draft, made his pro debut that year, and promptly threw a no-hitter for the Fort Lauderdale Yankees on August 7th. Following the 1980 season, he was taken by the Minnesota Twins in the 1980 Rule V Draft. He made his big league debut in 1981 and spent part of two seasons with the Twins, primarily as a reliever. While with the Toledo Mud Hens in 1982, he led the International League with 125 strikeouts. After the 1982 season, Cooper was traded to the Toronto Blue Jays. He was an IL All-Star with the Syracuse Chiefs in 1983 and earned another cup of coffee in the majors. The next spring, he was sent to the New York Yankees, pitching in his final big league game on June 2, 1985. Overall, he was 1-6 with a 5.27 ERA in 44 big league games and 65-47 with a 3.46 ERA and 64 saves in 289 appearances in the minors. In 1989, Cooper played for the St. Lucie Legends of the Senior Professional Baseball Association. The next year, he pitched for the Fort Myers Sun Sox; in 8 games, Don was 0-1 with a 2.77 ERA and was tied for the league lead with 4 saves when the SPBA folded.

Since 2002, Don has been the White Sox pitching coach. With two games to go in the 2011 season, he took over for Ozzie Guillen as interim manager; bench coach Joey Cora had been expected to get the assignment, but was instead let go among speculation that he would follow Guillen to the Miami Marlins in 2012. Cooper returned as pitching coach under new manager Robin Ventura in 2012 and acted again as an interim manager on June 7, 2013 when Ventura took a day off to attend his daughter's high school graduation. Cooper got the nod as bench coach Mark Parent also took the day off for the same reason (his son was the one graduating). The Sox lost the game, 4-3, to the Oakland Athletics. He continued as pitching coach after Ventura's departure, working with Rick Renteria and saw the White Sox return to the postseason in the shortened 2020 season, but a few days later, on October 12th, he was dismissed at the same time as Renteria over differences with the team's front office.