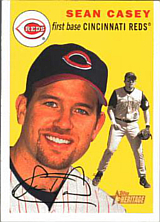 "There's no debate, and there never will be a debate. Sean Casey is the nicest guy in professional baseball. Ever." - Hal McCoy, Cincinnati Reds beat writer

Casey is the only player to record the first-ever hit at two major league ballparks, turning the trick within three days in 2001. At the Milwaukee Brewers new home, Miller Park, he singled off Jeff D'Amico in the 2nd inning on April 6th. On April 9th, at the Pittsburgh Pirates' christening of PNC Park, Sean homered off Todd Ritchie in the top of the 1st, part of a 4-for-4, 5 RBI day.

In 2012, Sean was inducted into the Cincinnati Reds Hall of Fame, alongside fellow first basemen Dan Driessen and John Reilly. In his first year of eligibility for the Cooperstown Hall of Fame in 2014, he failed to receive a single vote and dropped off the ballot.

Along with late night talk show host Conan O'Brien, Casey is the founder of Labels Are For Jars, an anti-hunger organization based in Lawrence, MA. In February 2011, he was at work on building a Miracle League park in Upper St. Clair, PA. In late 2013/early 2014, he suffered a blood clot, which split and went into both lungs; while almost everybody who has this happen dies, Casey miraculously survived. [1] He currently works as an analyst with the MLB Network.