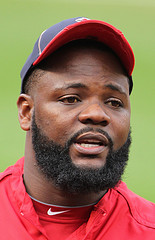 Fernando Rodney's cousin, Alfredo Figaro, was a teammate on the Detroit Tigers. Fernando reached the majors with the Tigers in 2002 and also pitched for them in 2003, but had an ERA above 6.00 both years. He then missed all of 2004 with an injury. he had his first good season in 2005, when he was 2-3, 2.86 with 9 saves in 39 games. In his first full major league season in 2006, he pitched 63 times, going 7-4, 3.52 with 7 saves as one of two set-up men for Todd Jones, alongside Joel Zumaya. The Tigers made it to the World Series that year, losing in five games to the St. Louis Cardinals. he was unscored upon in 3 appearances in the ALCS against the New York Yankees, but gave up 4 runs in as many outings in the Series as Detroit's bullpen was pushed around by the Cards. In 2007, he was 2-6, 4.26 in 48 games, with 1 save, then in 2008 saved 13 games while going 0-6 with an ERA of 4.91 in 38 games. At that point, he was more potential than consistent results, but the Tigers decided to give him a chance to close full-time and it worked as he saved 37 games for the Tigers in 2009, although some of his peripheral numbers, such as an ERA of 4.40 and 61 strikeouts against 41 walks in 75 2/3 innings, were far from dominant.

Rodney signed a large free agent contract with the Los Angeles Angels of Anaheim before then 2010 season, but had two poor seasons on the West Coast, as he was slowed down by injuries. He saved only 17 games over the two seasons and was limited to 32 innings in 2011.

Rodney won the 2012 American League Comeback Player of the Year Award following a tremendous season as closer of the Tampa Bay Rays in 2012. He had signed with the team in spring, then became the closer as incumbent Kyle Farnsworth began the season on the disabled list. He set a record with an ERA of 0.60, the lowest ever by a reliever pitching at least 60 innings, bettering the 0.61 set by Dennis Eckersley in 1990. He did not allow a run after August 14th, a string of 19 straight scoreless appearances to finish the season. He gave up only 5 earned runs in 74 2/3 innings and saved 48 games. He continued his dominance in the 2013 World Baseball Classic, as he made 6 appearances in the 7 games played by the Dominican Republic national team. He did not give up a single run and recorded a save in every appearance, setting a tournament record, as the Dominicans won their first title. No pitcher had ever saved more than three games in a Classic before, with only Francisco Rodriguez and Chan-ho Park having even notched that many. Rodney thus not only became the single-tournament Classic leader in saves but the career leader. He made the tournament All-Star team, joining Kenta Maeda and Nelson Figueroa as the selected hurlers.

His string of scoreless appearances in the majors ended on April 3rd, in his first outing of the 2013 season, when he blew a 6-5 lead by giving up a 9th-inning run to the Baltimore Orioles. However, Matt Joyce hit a lead-off homer against Tommy Hunter in the bottom of the 9th, and Rodney was credited with the Rays' 7-6 win. He saved 37 games that season, but also had 8 blown saves and his ERA increased to 3.38. In the ALDS, he blew a save opportunity in Game 3 on October 7th, allowing the Boston Red Sox to score the tying run in the 9th, but he still emerged with the win when Jose Lobaton hit a walk-off homer off Koji Uehara in the bottom of the inning.

Pitching for the Leones del Escogido in the Dominican League on January 14, 2014, Rodney completed a 6-0 no-hitter over the Tigres del Licey by pitching a perfect 9th inning. Jon Leicester had started the game by pitching five innings, but left with the game still scoreless; Ramon Garcia got credit for the win as Escogido's bats woke up during his two-inning stint on the mound. Armando Rodriguez pitched the 8th before Rodney got to end things, striking out two of the three men he faced, including Lonnie Chisenhall­ for the final out. The win secured a spot for Escogido in the league's championship game. On February 13th, he finalized a two-year deal with the Seattle Mariners worth $14 million.

He had a very good 2014 season with the Mariners, as he led the American League with 48 saves and 64 games finished. In 69 appearances, he was 1-6, but with a solid 2.85 ERA and 76 strikeouts in 66 1/3 innings. The Mariners were counting on him again as their closer in 2015, but he struggled to a 5.68 ERA in 54 games, and had 6 blown saves to counterbalance his 16 saves. He lost the closer's job in early June when his ERA ballooned over 7.00, and while he pitched somewhat better the next two months, he never showed enough consistency to regain his old gig, even though no replacement was able to step forward. On August 27th, he was sent to the Chicago Cubs for future considerations, reuniting him with former Rays manager Joe Maddon. He did a lot better in 14 games with the Cubs, posting an ERA of 0.75 in 12 innings to along with a 2-0 record. He made one scoreless appearance against the St. Louis Cardinals in the NLDS, but in the NLCS against the New York Mets, he allowed a two-run homer to Daniel Murphy in his lone appearance in Game 4.

In spite of his advancing age and not entirely convincing performance in 2015, Fernando managed to land a one-year deal with the San Diego Padres in 2016, which came with an opportunity to become Craig Kimbrel's replacement as the team closer. That's exactly what he did in the first half, as he went 17 for 17 in save opportunities while putting up a minuscule 0.31 ERA in 28 games. On June 30th, the Padres cashed in on his re-established value, trading him to the Miami Marlins in return for prospect Chris Paddack. He fell back to earth in Miami, putting up a 5.89 ERA in 39 games, with a record of 2-3 and 8 saves. That gave him an overall record of 2-4, 3.44 and 25 saves in 67 games and 65 1/3 innings. He maintained a very good strikeout rate, with 74 Ks against 37 walks. He became a free agent again after the season, and on December 9th completed negotiations on a one-year deal with the Arizona Diamondbacks worth $2.75 million. Even though his ERA was a bit high at 4.23 in 2017, he still managed to save 39 games in 45 attempts, 3rd most in the National League. The D-Backs made it the postseason for the first time since 2011 and on October 4th, he closed out his team's 11-8 win in the Wild Card Game, advancing them to a confrontation with the Los Angeles Dodgers in the Division Series. However, the D-Backs never had a lead to protect in that series and as a result Fernando did not see any action. A free agent again after the season, on December 14th he signed a one-year deal with the Minnesota Twins.

The Twins had a disappointing first half in 2018, but Rodney still manage to notch 21 saves before the All-Star break, with a 3.12 ERA and still over a strikeout per inning. In his final appearance before the break on July 15th, he came into the game in the 5th inning, something rather unusual for a closer. There was a reason, though, as he was headed to Miami, FL that day in order to attend a citizenship hearing the following morning. He became a United States citizen after having spent 19 years in the country since moving in as a fresh-faced kid. He was 3-2, 3.09 in 46 games with 25 saves on August 9th when he was traded to the Oakland Athletics in return for minor leaguer Dakota Chalmers. It was not clear what his role would be with his new team, as the A's were set in the back of their bullpen with closer Blake Treinen and outstanding rookie Lou Trivino. In 22 games, he went 1-1, 3.92 with no saves in 20 2/3 innings. However, he had a poor appearance in the Wild Card Game against the New York Yankees on October 3rd. he started the bottom of the 6th with Oakland trailing, 2-0, but quickly got himself in trouble by allowing back-to-back doubles to Aaron Judge and Aaron Hicks. After he uncorked a wild pitch, he was lifted in favor of closer Blake Treinen, but the latter also failed in his almost impossible mission of keeping the score within reach as he gave up a walk, a stolen base and a triple to Luke Voit before finally recording the inning's first out; the A's were trailing 6-0 by the time the inning ended and the game was now out of hand.

On April 1, 2019, Fernando pitched in the 900th game of his career, becoming the 26th pitcher to reach the milestone. By then he was the oldest player in the major leagues, following the retirement of Ichiro Suzuki after the two-game opening series played in Japan between the A's and Ichiro's Seattle Mariners. He was designated for assignment on May 25th after going 0-2, 9.42 in 17 games. However, having more lives than the average cat, Rodney landed on his feet, thanks to the Washington Nationals having an absolutely wretched bullpen and being willing to try just about anything. He signed with them on June 4th, made his first appearance for them on June 25th, and on June 28th recorded his first save of the year against the Tigers. That allowed him to tie a record by having had a save with 9 different teams.

Though his major league career appeared over after the 2019 campaign, he remained active in baseball by appearing in a single game for the independent Sugar Land Skeeters in 2020 and playing in the Dominican Winter League in 2020-21; he'd spent a few seasons in that circuit previously.

Rodney threw a fastball in the upper 90's that he complemented with an outstanding change-up, coming out of the same motion, but a good 10-15 mph slower. He alternated between the two pitches seemingly at random, making it extremely hard for the batter to guess which was coming. He was also known for wearing his cap slightly sideways with a flat brim, and for shooting an imaginary arrow into the sky whenever he successfully completed a save. The cap was in tribute to his late father, Ulise, a fisherman, who wore his hat that way, and the arrow was in honor of La Flecha (arrow in Spanish), a village near Rodney's hometown.