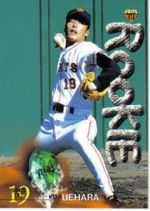 Unable to play baseball in junior high because his school lacked a team, Koji Uehara made up for it in later years. In high school he was an outfielder and reliever, while Yoshinori Tateyama occupied the role of main pitcher. In college, he was 36-4 and was named the top pitcher in the Hanshin University League four times. His club won five titles with Uehara leading the way.

In 1997, Uehara ended Cuba's 6-year winning streak in international tourneys, covering two Olympics, two Intercontinental Cups, one Pan-American Games and one Baseball World Cup. Uehara's win came in the championship of the 1997 Intercontinental Cup as Japan beat Cuba 11-2; on the tournament Uehara was 1-0 with 12 strikeouts in 12 innings, 6 hits allowed and 3 walks and he was named to the All-Tournament team. In the 1998 Baseball World Cup, Uehara was 2-0 with a 2.13 ERA. He allowed 16 hits and struck out 33 in 25 1/3 IP. He led the tourney in strikeouts, five more than Jose Contreras or Byung-hyun Kim and tied for the lead in wins.

The Anaheim Angels made an offer to Uehara out of college, but he instead signed with the Yomiuri Giants after being their #1 draft pick. 1999 was a grand year for rookie pitchers in Nippon Pro Baseball - Daisuke Matsuzaka led the Pacific League in wins, while Uehara led the Central League. Both were named Rookies of the Year in their respective circuits. Koji was 20-4 and won 15 games in a row at one point. Uehara edged Matsuzaka as the Sawamura Award winner, made the Central's Best Nine, won a Gold Glove and was an All-Star. He led the Central League in ERA (2.09, .56 lower than runner-up Shigeki Noguchi and strikeouts (179) in one of the best debuts in NPB history. He walked only 24 batters in 197 2/3 innings.

Uehara slipped to 9-7, 3.57 the next year and missed the All-Star team for the only time as of 2005. He opened the 21st century with a 10-7, 4.02 season but was an All-Star again. Returning to form in 2002, Koji went 17-5 with a 2.60 ERA and 23 walks and 182 strikeouts in 204 innings. He was second to Kei Igawa in stikeouts, tied Kevin Hodges for the win lead, was 4th in ERA, led the league with 8 complete games, made his third All-Star team, was named to his second Best Nine and won his second Sawamura Award. On November 11, 2002, Uehara became the first pitcher in over a year to strike out Barry Bonds three times in a game. Relying primarily on his forkball, Uehara helped lead the Japanese All-Stars to an 8-4 win over the American All-Stars that game.

In 2003 Uehara went 16-5 with a 3.17 ERA. He led the league in complete games (11) and strikeouts (194 in 207 1/3 innings), walked just 23 batters again, won his second Gold Glove and was second to Igawa in CL wins. He again placed fourth in ERA. He helped Japan win Gold at the 2003 Asian Championship. The next season Koji had a 2.60 ERA and went 13-5, but lost time while serving on the Japanese team in the 2004 Olympics. He was still third in the league in wins and led in ERA for the second time, beating runner-up Masahiro Yamamoto by 0.55.

Uehara was moved to the closer's role in 2007 and expressed his dismay about leaving the rotation. He did start in the first NPB All-Star Game of the year and combined with Shingo Takatsu, Masanori Hayashi, Atsushi Kizuka, Hitoki Iwase, Hiroki Kuroda, Tomoyuki Kubota, Marc Kroon and Kyuji Fujikawa on a one-hit shutout of the Pacific League. In 2007, Uehara was 4-3 with 32 saves and a 1.74 ERA. He struck out 66 and walked only 4 in 62 innings of work. He was third in the CL in saves behind Fujikawa and Iwase.

Uehara retired all six batters he faced in the 2007 Asian Championship and registered the only save of the tournament. Japan won gold and clinched a spot in the 2008 Olympics. In the Beijing Games, Uehara was the least-used Japanese hurler, allowing no hits or runs in 2 innings while they failed to earn a Medal. He saved a 1-0 win over Team Canada, relieving Yoshihisa Naruse and tossing a perfect 9th inning.

In the 2008 campaign, Koji was 6-5 with a save and a 3.81 ERA in 26 games, split between the rotation and bullpen in an unimpressive season. He went 0-1 with a 2.70 ERA in the 2008 Japan Series with 12 strikeouts in 10 innings. In Game one, he lost a 2-1 pitching duel to Hideaki Wakui, allowing solo homers to Taketoshi Goto and Hiroyuki Nakajima. In game five, he gave up 7 hits and 2 runs in 3 innings before manager Tatsunori Hara yanked him in favor of rookie Tetsuya Yamaguchi.

With the Rangers in 2012, Uehara remained superb despite missing two and a half months with injury (Sv, 1.75 ERA, .64 WHIP, 252 ERA+ in 37 G). He had the third-best K/BB ratio and the fourth-lowest WHIP by a pitcher with 30+ IP since 1900; only Mike Adams (2009) and Eckersley (1989-1990) had lower WHIPs. In the 2012 AL Wild Card Game, he fanned Davis, Adam Jones and Matt Wieters in a perfect 8th of a 5-1 loss to his old O's teammates. A free agent, he signed with the Boston Red Sox and went 4-1 with 21 saves, a 1.09 ERA, .57 WHIP and 265 ERA+ in 73 games in 2013, winning the closer job after injuries to Andrew Bailey and Joel Hanrahan. He tied Brian Duensing and Casey Fien for 7th in the American League in games pitched. He became the first pitcher in major league history to strike out over 100 batters (101) with under 10 walks (9). he was one of the heroes of the red Sox's conquest of the 2013 World Series title, being named MVP of the ALCS and adding a couple of saves in the World Series; he gave up a single run in 13 2/3 innings during the postseason, walking none and striking out 16. He continued to excel early in the 2014 season, in spite of the Red Sox falling to last place in the AL East by the mid-year point: he had an ERA of 1.30 after 40 games with 18 saves and his customary excellent WHIP and K/W ratio. He was added to the AL's roster for the 2014 All-Star Game, replacing injured compatriot Masahiro Tanaka. He pitched 64 times for the Red Sox, compiling a record of 6-5, 2.52 with 26 saves and 80 strikeouts in 64 1/3 innings. the Sox were again out of the running early in 2015, but Koji continued to do a fine job closing games when the opportunity arose. In 43 outings, he was 2-4, 2.23 with 25 saves and 47 Ks in 40 1/3 innings. However, his season ended early as on August 7th, he was hit on the right wrist by a line drive off the bat of Ian Kinsler of the Detroit Tigers, breaking a bone.

Koji played one more season with the Red Sox in 2016, getting into 50 games with a record of 2-3, 3.45 and 7 saves. He was no longer the main man in the bullpen as the Red Sox had acquired closer Craig Kimbrel before the season, but he was still a valuable pitcher as the team returned to the postseason for the first time since its win in the 2013 World Series. He appeared twice in the Division Series against the Cleveland Indians, giving up just one hit and no runs in 2 innings as Boston was swept in three games. In 2017, he joined the Chicago Cubs and pitched 49 games at age 42, going 3-4, 3.98 with 2 saves. However, he made his final appearance on September 2nd and missed the postseason altogether.

Uehara became a free agent again after the 2017 season, but was unable to find a team interested in signing him in the U.S.major leagues and on March 9th inked a deal with his former team, the Yomiuri Giants, for 2018. He went 0-5, 3.63 in 36 games, then in 2019, had no decisions and an ERA of 4.00 for the Giants' farm team in the Eastern League. On May 21st, he announced his retirement at a news conference in Tokyo, explaining that he could no longer pitch well enough to justify his spot on the team.