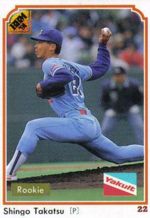 Shingo Takatsu pitched in the majors in 2004 and 2005, finishing second in the Rookie of the Year voting his first year. He has also had a long career in Japan.

He helped the Japanese national team win the Silver Medal in the 1990 Goodwill Games. The Tokyo Yakult Swallows drafted him in 1990 and he made his debut the following year. Takatsu pitched for the Swallows for 13 years amassing 260 saves (breaking the record previously held by Kazuhiro Sasaki). The record was broken in 2011 by Hitoki Iwase. He earned the nickname "Mr. Zero" by not surrendering any runs in 10 Nippon Series games.

In 2004, he signed with the Chicago White Sox, and during the season he became the team's closer and saved 19 games. He was a sensation for the Sox and finished second in the voting for the Rookie of the Year Award.

The next year, 2005, he struggled early in the season. While he had a number of successful outings, he also had a few times where he was bombed and that hurt his ERA. Although he started the season as the White Sox closer and had a number of saves early in the season, it didn't take long before manager Ozzie Guillen replaced him with Dustin Hermanson. Takatsu had a 5.97 ERA for the Sox. By August, he had long since fallen out of favor with the club and was released. He then signed on with the New York Mets where he pitched in only 9 games before he returned to the Swallows in 2006. With Yakult, he went 1-2 with a club-leading 13 saves and a 2.74 ERA in 48 appearances; he took over the closer role when Hirotoshi Ishii was injured.

In the first 2007 NPB All-Star Game, Takatsu teamed with Koji Uehara, Masanori Hayashi, Atsushi Kizuka, Hitoki Iwase, Hiroki Kuroda , Tomoyuki Kubota, Marc Kroon and Kyuji Fujikawa to one-hit the Pacific League in a 4-0 win. It was not a good year overall for Takatsu, though, as he was 0-5 with 13 saves and a 6.17 ERA in 25 games. Yakult released him following the season.

Takatsu signed a minor league deal with the Chicago Cubs for 2008, but was released in spring training. He then moved to South Korea, signing with the Woori Heroes in June. He debuted on June 24th, allowing one run in one inning and getting a hold. He had a 0.86 ERA in 18 games, going 1-0 with 8 saves in the Korea Baseball Organization.

The Heroes did not bring Takatsu back for 2009. In June, he signed a minor league deal with the San Francisco Giants. He was 0-1 with a 6.87 ERA in 14 games for the Fresno Grizzlies then was released.

Takatsu's next stop was Taiwan, signing with the Sinon Bulls for 2010 and debuting on March 23rd. When he saved a game eight days later, he became the first player with saves in MLB, NPB, the KBO and the Chinese Professional Baseball League. He had a great year, going 1-2 with 26 saves and a 1.88 ERA. He was second to Ryan Cullen in saves. He then moved to the Baseball Challenge League, the first meikyukai member to play in the Japanese independent leagues; he saved 16 games with a 2.16 ERA. He was a player-coach in 2012 then became an announcer.

He became a coach with Yakult in 2014 then became their manager in 2020, the second Japanese MLB vet to manage in NPB (following Tadahito Iguchi) and the first former Japanese indy league coach to manage in NPB. After a last-place finish his first year, he turned things around, as they won the 2021 Japan Series and he took the Matsutaro Shoriki Award for his efforts. He made the Japanese Baseball Hall of Fame that year alongside Masahiro Yamamoto and Shigeyoshi Matsumae as part of the 2022 Japanese Baseball Hall of Fame Election.