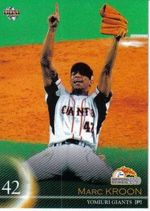 After a relatively undistinguished career in organized baseball, Marc Kroon repeatedly broke the Nippon Pro Baseball record for fastest pitch during the 2005 season (in which he replaced Kazuhiro Sasaki as Yokohama's closer). Previously the record was 158 km/h (98 mph) by Hideki Irabu, Kazuo Yamaguchi and Ryota Igarashi. On April 30th, Kroon tied the old mark. He then broke it with 159 kph (on May 11th), then 161 km/h on July 19th to become the first 100 mph pitcher in NPB history. Not content with that, he threw one at 162 km/h (101 mph) on August 11th - the 4th time this season he got his name into the record book for the fastest pitch.

Overall in 2005 Kroon was 3-2 with 26 saves in 55 games, having fanned 61 in 53.3 innings. He walked 23 and allowed 42 hits, posting a 2.70 ERA. Though he had repeatedly broken one record, he ranked just 4th in the 6-team Central League in saves and had the worst ERA of his the Bay Stars' 3 main relievers. Kroon was considered one of the most pleasant surprises of the season, though, and had successfully replaced the best reliever in Japanese baseball history.

Kroon moved to the Yomiuri Giants in the off-season, signing a one-year, 350 million yen deal. On September 20, he saved his 120th game in Japan, tying Eddie Gaillard for the most saves by a foreign pitcher. His 41 saves in 2008 was a NPB record for foreign hurlers, tied in 2015 by Tony Barnette and Seung-hwan Oh. In spite of having saved 177 games in Japan, and striking out 73 in 50.2 innings, while allowing only 29 hits in 2010, he failed to find a team for the 2011 season. He told interviewers that he suspected that teams did not want to see him become the first non-Japanese pitcher to reach 200 saves. He fell back on accepting a non-roster invitation to head to spring training with the San Francisco Giants. He did not make the major league squad, but accepted an assignment with the Fresno Grizzlies of the Pacific Coast League.

His son Matt Kroon is a minor league infielder.