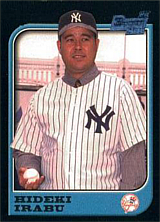 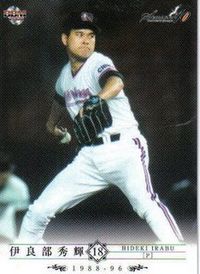 Following the 1996 season, Hideki announced he wanted to go to the majors, so Chiba, which had a working agreement with the San Diego Padres, sold him to the Padres. Irabu, who stated that he would only play for the New York Yankees, ended up getting his way and was traded to the Bronx for outfielder Ruben Rivera, pitcher Rafael Medina, and $3 million cash. Irabu signed a $12.8 million deal with the Yankees in May 1997. He struggled in his first year, going 5-4 with a 7.09 ERA in 13 games. In 1998, Irabu put together what would be his best major league year, going 13-9 with a 4.06 ERA in 29 games. Finishing out his career in New York in 1999, Irabu went 11-7 with a 4.84 ERA 32 games.

Yankees owner George Steinbrenner was not a big fan of Irabu and once called him a "fat pussy toad" after he failed to cover first base in a game. He traded him to the Montreal Expos for pitchers Jake Westbrook, Ted Lilly, and Christian Parker, a trade executed at the behest of new Expo owner Jeffrey Loria which would cost them dearly, as they lost their top three minor league pitching prospects in one fell swoop. Irabu struggled mightily in his two years with our neighbors to the north, spending most of his time on the disabled list. When he missed a rehabilitation start with the Ottawa Lynx because he was apparently drunk, it was the last straw, and the Expos unceremoniously released him.

For a time, Irabu lived in Los Angeles, CA with his wife and daughter, running an udon restaurant. In August 2008, he was arrested for allegedly attacking a restaurant manager in Osaka at 3 AM after drinking approximately 20 jugs of beer. In May 2009, Irabu came out off retirement to pitch for the Long Beach Armada of the independent Golden Baseball League. That August 2009, he returned to Japan to play in the independent Shikoku-Kyushu Island League with the Kochi Fighting Dogs, a team in southern Shikoku.

Irabu was found dead in his California home on July 27, 2011. The Los Angeles County coroner announced that the cause of death was hanging, as Irabu had apparently committed suicide at age 42. He did not leave a note. An autopsy revealed he was inebriated and had the anti-anxiety medication Ativan in his system.