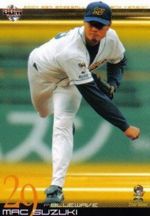 Mac Suzuki was one of the first Japanese players to begin his professional career directly in the United States.

In the minors with Don Nomura[edit]

Mac Suzuki was expelled from high school in the 11th grade for fighting. Suzuki's father contacted Don Nomura, owner of the Salinas Spurs, as Nomura had previously expressed an interest in Suzuki at a baseball clinic run by Tony Gwynn and Katsuya Nomura. Suzuki became the Spurs' clubhouse boy. Among his tasks were concessions, batting practice pitching and janitorial work. Mac pitched one inning for Salinas in 1992.

Nomura sold Salinas, ending his ownership career, and signed Suzuki as the first of many star clients to begin his time as an agent. With the 17/18-year old Suzuki throwing 95 mph, he became a hot property for the team, now called the San Bernardino Spirit. He went 4-4 with 12 saves and a 3.68 ERA, striking out 87 and allowing 59 hits in 81 innings. He did walk 56 batters but was voted the 6th-best prospect in the California League by managers there.

In the Seattle system[edit]

Nomura arranged a $750,000 contract for Suzuki with the Seattle Mariners after a bidding war in 1993. That gave him a chance to become the first Japanese native to pitch in Major League Baseball since Masanori Murakami in the 1960s. Rated as the #2 prospect in the Mariners system by Baseball America (behind only Alex Rodriguez), Suzuki only pitched in 8 games due to injuries in 1994 with the Jacksonville Suns, going 1-0 with 1 save and a 2.84 ERA. He struck out 10 in 13 innings, but allowed 19 baserunners. Picked as the system's #5 prospect entering 1995, he again saw very limited duty due to health problems. With the AZL Mariners he gave up 4 runs in 4 innings over 4 games, winning one, while with the Riverside Pilots Mac had a 4.50 ERA in 8 innings, losing his only decision.

Remaining the #5 prospect in the Seattle chain, Suzuki finally got healthy in 1996 and at age 20/21 went 3-6, 4.72 in 16 starts with the Port City Roosters (whiffing 66 in 74 innings) and 0-3, 7.25 in 13 games with the Tacoma Rainiers, allowing 43 baserunners in 22 innings. Hideo Nomo had beaten him to being the first Japanese major leaguer since Murakami, but Suzuki became the third to play in the big leagues and the first one to do so without playing a day in Nippon Pro Baseball when he was called up to the Mariners for a brief look in July. He donned #96 because his fastball topped out at 96 miles per hour. He appeared in one game and was wretched, serving up a 20.25 ERA.

Making the Mariners' big league team out of Spring training (and switching to a conventional uniform number), Mac finally played a full major-league season in 1999 with the Mariners and Kansas City Royals. He went 2-5 with a 6.89 ERA (73 ERA+) and was fifth in the American League with 11 wild pitches. Suzuki's best year came in 2000. As a regular member of the Royals' rotation, he went 8-10 with a 117 ERA+ (4.34 ERA). He was 5th in the AL with 94 walks and 11 wild pitches, but arguably had the best year by any Kansas City pitcher that season.

Suzuki signed a minor-league contract with the Oakland A's in December of 2005, but was released. Finding his way to a third country, he joined the Tijuana Colts of the Mexican League about a quarter of the way into the LMB season and notched saves in his first three tries in his attempt to resurrect his career. He was 1-2 with 9 saves and a 2.77 ERA at the half and made the LMB All-Star Game, pitching one scoreless inning there. He went 4-5 with 11 saves and a 3.48 ERA in 27 games in the 2006 Liga campaign, then was signed by the Chicago Cubs to a minor league deal and assigned to the Iowa Cubs. He was 1-0 with a 4.11 ERA in 11 games for Iowa.