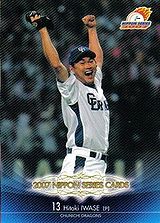 Iwase was an outfielder for most of his college career and did not start pitching until he was a senior. After spending time with NTT Tokai in the industrial leagues, he was picked by the Chunichi Dragons in the second round of the 1998 draft.

At age 24, Hitoki debuted with a strong 10-2, 1.57 record and one save in 65 games. He struck out 73 and walked 22 in 74 1/3 IP as the most effective hurler on a very good staff. He led the Central League in appearances and won the first of three Middle Reliever of the Year awards. In the 1999 Japan Series, he pitched four innings of one-hit ball, striking out six and allowing no runs and three walks. Iwase again won 10 and saved one in his second season; he lost 5 and had a 1.90 ERA. He made his first CL All-Star team that year. In his only career start, he gave up just one run in seven innings. He was again the Middle Reliever of the Year.

In 2004, Hitoki replaced Akinori Otsuka as closer for the Dragons and went 2-3 with 22 saves and a 2.80 ERA. He missed time due to the 2004 Olympics, during which he pitched scoreless ball for the bronze medalists. In the 2004 Japan Series, Iwase pitched 5 1/3 scoreless innings, striking out five and allowing three hits and a walk. He had no decisions or saves in Chunichi's loss in 7 games.

Hitoki was 1-2 for the 2005 Dragons but saved 46, one more than Sasaki had notched 7 years prior. He made his fourth All-Star team and had a 1.88 ERA. He walked only 8 while striking out 52 in 57 1/3 innings pitched. He won his first Fireman of the Year award. In 2006, the left-handed closer remained dominant with a 2-2, 1.30 season with 40 saves. He walked 8 and fanned 44 in 55 1/3 IP. He made his fifth All-Star squad, led the CL in saves again and again was the Fireman of the Year. He became the first NPB pitcher ever to save 40 games in back-to-back seasons. He is also just the second NPB pitcher ever to throw in 50 games for 8 years in a row. He saved game one in the 2006 Japan Series for Chunichi, pitching one scoreless frame, but the Dragons dropped the next four. He had now pitched 10 1/3 career innings in the Japan Series without allowing a single run.

He entered 2007 with a career ERA of just 1.91, the lowest of any NPB pitcher with 400 appearances. Iwase reached 500 appearances in July of 2007; he was just the 4th NPB pitcher to have an ERA under 2.00 when he reached that level and the first since Kazuhisa Inao in the early 1960s. Shortly thereafter, he had the worst outing of his career - on July 16, he allowed 5 runs in 2/3 of an inning. He had never allowed more than 3 runs in a game before. Four days later, he was part of a committee that one-hit the Pacific League in the first NPB All-Star Game of the season; the other hurlers were Koji Uehara, Shingo Takatsu, Masanori Hayashi, Atsushi Kizuka, Hiroki Kuroda, Tomoyuki Kubota, Marc Kroon and Kyuji Fujikawa.

Iwase was 2-4 with 43 saves and a 2.44 ERA in 2007. He finished second to Fujikawa in the CL in saves and tied for 6th with 61 games. He pitched two scoreless innings in the 2007 Japan Series, picking up two saves as Chunichi won its first title in over 50 years. One save was somewhat controversial as he replaced Daisuke Yamai in the 9th inning of a perfect game. Iwase kept the perfecto in shape as they wrapped up the first combined perfect game in NPB history and the first perfect game in Japan Series records.

Iwase became a free agent after 2007 and there were rumors he may come to the USA. Iwase was expected to see how Hideki Okajima would fare, as the two had similar styles. Despite Okajima's success, Iwase said he planned to remain with Chunichi.

Iwase was with Japan for the 2007 Asian Championship and struck out 3 in 2 1/3 IP, but allowed one run. Japan won and moved on to the 2008 Olympics. Iwase was a big reason why Japan failed to win a Medal in Beijing, taking 3 of their 5 losses. He allowed 10 hits and 10 runs in 4 2/3 IP despite 7 strikeouts. He tied the record for losses in an Olympics in the medal era, set by Félix Nova in 1992.

Iwase's first poor outing in the 2008 Olympics came against the South Korean national team. Entering with a 2-2 tie in the 9th, he allowed a Dong-joo Kim single. With two outs, Kab-yong Jin walked and Hyun-soo Kim singled in one run. Jong-wook Lee singled home Jin and a throwing error by Shinnosuke Abe led to another score. Japan lost 5-3 and Iwase took his first defeat of the Olympics. He allowed 3 singles in taking the loss against Team USA in the 11th inning of their round-robin match. He was entrusted with another 2-2 score against South Korea in the semifinals, appearing in the 8th inning. He allowed a single to Yong-kyu Lee then a 2-run homer to Seung-yeop Lee. Dong-joo Kim singled and reliever Hideaki Wakui let the inherited runner score as Iwase fell to 0-3 in Beijing and Japan was eliminated from contention for the Gold; they lost their finale to go home empty.

Iwase re-signed with Chunichi for 4 seasons following 2008, citing his Olympic struggles as a reason he would not make the transition to the US, something he had considered in recent off-seasons. Iwase's deal paid him 430 million yen in 2009, making him the highest-paid active pitcher in Japan for the 3rd time in 4 years.

In 2009, Iwase was 2-3 with 41 saves and a 2.12 ERA. He became the first southpaw to save 200 games in NPB and also became Chunichi's career leader in games pitched. He led the CL in both saves and save points. During 2010, the ace closer went 1-3 with 42 saves and a 2.25 ERA. He made his 7th All-Star team, after missing the prior two years. He led in saves and save points once more and moved behind only Takatsu and Sasaki on NPB's career save list. When he reached 250 saves, he joined the meikyukai. In the 2010 Japan Series, he retired six of the seven batters he faced, walking one. He saved one game but Chunichi fell to the Chiba Lotte Marines.

His fastball has peaked at 92 mph and his slider reaches 86 mph. He also has a shuuto/sinker in response to his common fastball velocity. He employs an odd delivery and some felt it made him injury-prone, but he has been relatively healthy throughout his career. He picked his uniform number of 13 because it represents a deity of death in Tarot.