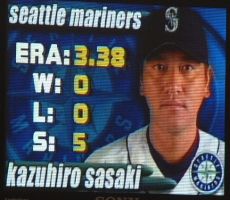 Due to his chiseled features and savior role as a closer, Kazuhiro Sasaki was nicknamed Daimajin. The nickname was derived from a trilogy of 1966 movies featuring a giant statue named Daimajin that routinely saved a village in response to their prayers.

While sick and hospitalized often as a child, Sasaki grew to become a physically imposing adult. In high school, he pitched in three Koshien Tournaments in the most prominent event of the Japanese amateur baseball season. In college, he missed three seasons due to back problems and had surgery twice, but was dominant when healthy - 11-0 with a 0.39 ERA and one no-hitter.

Despite his injury-prone history, Sasaki was drafted by the Taiyo Whales. He made his Nippon Pro Baseball debut in 1990, going 2-4 with 2 saves and a 5.85 ERA - he walked 30 and allowed 49 hits in 47.7 innings and obviously needed seasoning.

The best was yet to come. In 1997, Daimajin only allowed 6 runs in 60 innings, for an ERA of 0.90 - all 6 runs coming on solo homers. In those 60 innings, he allowed just 25 hits, 17 walks and struck out 99 batters. He finished just 44 Ks behind the #3 strikeout pitcher in the league, even though he had been a closer all year long. He was 3-0 with 38 saves; along with Korean reliever Dong-Yeol Son he set a new NPB record. He again won Fireman of the Year and made the All-Star squad after putting up a better-than-Eckersley season. '98 was even better. Sasaki's ERA dropped! While he allowed one more run (7 overall), he only gave up 4 earned runs and his ERA was 0.64; he walked 13 and fanned 78, allowing 32 hits in 56 innings. He broke his own save record by notching 45 (the record until 2005, when Hitoki Iwase broke it) and was 1-1. In addition to his usual awards (Fireman of the Year, All-Star) he won the MVP Award as he led Yokohama to their first Japan Series title ever. He was named to the Best Nine team as the top pitcher in the Central League, an honor almost always reserved for starters. He was the third reliever ever to win an MVP in Japan. By year's end, he not only held the NPB single-season save record, but also had set the career record, passing Yutaka Enatsu, who had saved 193. Sasaki became the first player to make 500 million yen a year in NPB, about $4 million per season. Additionally, he raked in a lot of money endorsing products.

1999 was a let-down after his banner year. Yokohama slipped to third, manager Hiroshi Gondo (whom Sasaki appreciated due to his less aggressive style of pitcher usage) was let go and Sasaki had elbow surgery during the season. He only made it into 23 games, posting a still-great 1.93 ERA and going 1-1 with 19 saves. He walked 6 and struck out 35 in 23.3 innings and allowed single-digit runs (5) for the third straight season - during that period he had had given up 18 runs (15 earned) in 139.3 innings, for an ERA of 0.97.

With Gondo gone (replaced by a manager who loved rigorous traditional-Japanese-style practices), Sasaki decided to give American baseball a shot, something he had considered for some time. He hired agent Tony Attanasio and signed with the Seattle Mariners. In 2000, he set a rookie save record in MLB with 37 and became the second-oldest AL Rookie of the Year. A year later he made the AL All-Star team, saved 45 (second in the league) and again dazzled; his fine work helped the 2001 Mariners tie the MLB record of 116 wins in a season. He flew back to Japan early in the year, saying he was concerned about his wife's health, but rumors began to fly about marital strife, which he denied. A Japanese weekly magazine wrote that "(Sasaki's) rumored extramarital liaisons are too numerous to count." A year later he was an All-Star once more and improved his ERA+ to an amazing 166 with a 2.52 ERA season. He picked up 37 more saves that year.

Prior to the 2003 season, Sasaki signed a 2-year extension with the Mariners, increasing his salary to $8 million/year (over a billion yen, the first Japanese player to earn so much money). He was on the DL two times that year, once due to fractured ribs which he said he received when he fell down a staircase at home while carrying a suitcase. Baseball writer Robert Whiting comments that few people believed this explanation (akin to Jeff Kent getting hurt "washing his car"). A Japanese newspaper blamed Sasaki's alcoholism and expressed amazement that Sasaki was making so much money. Sasaki, while still posting an ERA+ better than 100, was nowhere near as effective as he had been in the prior 6 seasons. He had moved into the top 75 all-time in saves in MLB, while falling to #2 in NPB as Shingo Takatsu had passed him, 260 to 229.

Despite being due to make another $8 million in 2004, Sasaki asked the Mariners to void his contract, finally admitting to marital problems. His wife and two kids had stayed in Japan while he was playing in the US. The M's agreed and Sasaki returned to Yokohama for a second go-around. As of 2011, Sasaki remains the all-time Mariners saves leader with 129, and his 45 save 2001 season is still team best. The 36-year old was clearly not his old self, as he had trouble hitting 90 mph with his fastball and even was victimized by three consecutive homers in a game against Yakult. After blowing three straight saves, he announced that he was going to retire, but was talked out of it by Yokohama's management. They sent him down to the minors, from whence he would not return for the duration of the schedule. His numbers might suggest a competent season, going 1-2 with 19 saves and a 3.18 ERA in 25 games and ranking third in the Central League in saves while moving within 12 of catching Takatsu for the NPB career lead, but he was clearly on his way out from a performance standpoint. He fanned 18 and walked only 3, but for the first time since his 1990 rookie season, he struck out under a batter per inning in Japan (he had fallen behind that level twice in four years in the AL).

2005 started off on a good foot for Sasaki, who saved his first 4 contests, but things quickly unraveled and was sent down to the minors and Marc Kroon replaced him as Yokohama's closer. Then he reinjured his elbow and again had surgery on it and finally announced his retirement. His final game came on August 9th in Sendai, Miyagi province in a game against Yomiuri at Fullcast Stadium, where his mother could come to the game (she was not well enough to travel to Yokohama). Daimajin came in and fanned 500-homer man and longtime friend Kazuhiro Kiyohara on 4 pitches, leaving after quenching his desire to finish his career against Kiyohara. Overall it was a horrible year for Sasaki, who ended up at 0-3 with a 9 ERA and finished 8 saves shy of retaking the career NPB save lead, but he sure ended it on a good note.

While Sasaki said he was headed back to Japan to fix his marriage, the years of rumored affairs seemed to bear some legitimacy when he divorced his wife and married a much younger actress, Kanako Enomoto, with whom he had another child. Sasaki is a hero to many NPB fans for his superb pitching, but others decry his immoral personal life.

For his NPB career, he posted a 43-38 record with 252 saves and a 2.41 ERA. He struck out 846 batters in 621.7 innings during that time. His 381 saves between NPB and MLB would rank him 5th all-time behind Lee Smith, John Franco, Trevor Hoffman and Dennis Eckersley.

Sasaki wore number 22 because he was born on 2/22 at 2:22 AM. He runs a charity for slum kids in Thailand.He was the first reliever ever to be given the Matsutaro Shoriki Award as the man who did the most to advance Japanese baseball that year.

He was inducted to the Japanese Baseball Hall of Fame in the class of 2014 alongside Koji Akiyama, Hideo Nomo and Choichi Aida; he and Nomo were the first major leaguers voted in.