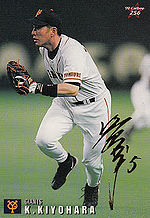 Kazuhiro Kiyohara was one of Japan's greatest sluggers for two decades. In high school, he was a star hitter. His team won the Koshien Tournament twice and finished second on a couple other occasions. After high school, he wanted to sign with the Yomiuri Giants but after they picked his teammate Masumi Kuwata 5 other teams got into a bidding war for Kiyohara's services. Kiyohara wound up with the Seibu Lions and made an immediate impact. As a rookie, he hit .304/.392/.584 with 31 home runs in 1986. He won Rookie of the Year honors in the Pacific League that year - the 31 HR matched the best by a Japanese Rookie of the Year and tied Takeshi Kuwata's 27-year-old rookie record). He was selected to the first of 17 All-Star teams. He was the first teenager to go deep in a NPB All-Star Game. He was the youngest player to drive in a run in a NPB All-Star Game until Ko Matsukawa broke his mark 36 years later.

Kiyohara hit another 31 HR in 1988 and hit .286/.410/.539 - that season he scored a league-high 97, drew 82 walks, won a Gold Glove and made his first Best Nine team at 1B. Seibu at this point was one of the most dominant teams in Pacific League history, winning the Japan Series three years in a row, tying the record for the PL. Kiyohara was one of the most popular players in Japan, due to his talent and good looks. He said that the only reason to become a pro baseball player was to attract beautiful women and afford expensive, speedy cars.

In '89, Kiyohara's homer and walk totals continued to rise (35 and 94 respectively) and he again drew 5 walks in a game. He hit .283/.424/.578 and in June reached 100 career homers before his 22nd birthday, the quickest player in Nippon Pro Baseball history to hit 100. The Lions failed to make the post-season in their bid to become the first Pacific League team to win 4 straight Japan Series.

Orestes Destrade joined Koji Akiyama and Kiyohara at the heart of the Lions' lineup during the 1989 campaign. In the next 3 seasons together, they powered the team to three straight Japan Series titles once more - for 6 in 7 years to start Kiyohara's career, the greatest run in league history. 1990 was one of Kiyohara's best years - he hit .307/.454/.615, setting personal highs in OBP and slugging, leading the league in slugging and OBP, hitting 37 homers (5 behind teammate and rival Destrade), drawing 105 walks (a new league record, breaking Katsuya Nomura's record; later in the decade Atsushi Kataoka would surpass Kiyohara), winning a Gold Glove and making the Best Nine. He lost out the MVP to Hideo Nomo. In '91, Kiyohara had one of his worst seasons - .270/.390/.469 with 23 HR and 80 BB. In 1992, he again was 5 homers behind Destrade (41-36) while hitting .289/.401/.558; he won his second OBP title, a Gold Glove and made the Best Nine once more. He also threw a bat at a pitcher that season after getting plunked in a nationally televised game; the minimal punishment set a poor example for young sluggers and Hideki Matsui's coach dissuaded him from following Kiyohara's example.

In '95, Kiyohara's team failed to make the Japan Series for just the second time in his career. He drew 90 walks to lead the league for a fourth time, hitting 25 homers (3 shy of league leader Hiroki Kokubo) and posting a .392 OBP and .478 slugging though his average fell to .245. Kiyohara's average would not return to his old levels much, as he was becoming a two-dimensional threat of walks and homers. In 1996, Kiyohara finished his Seibu career by hitting .257/.373/.509 with 31 long balls, having connected for at least 23 in every Pacific League season he had played but never leading the circuit. In 1996, he had come his closest, only one behind league leader Troy Neel. He also led the league with 30 doubles.

In 1999, Kiyohara missed an All-Star team for the first time in his career, after 13 straight appearances. He slipped to .236/.365/.430 with 13 homers and lost playing time due to injuries, and he was spelled by Domingo Martinez, another ex-Seibu slugger picked up by Yomiuri. The next year Kiyohara made it back to the Japan Series and the Giants beat the Daiei Hawks 4 games to 2. Kiyohara started a resurgence and hit .296/.385/.565 with 16 homers in 216 AB, but again, his playing time was diminished by the injury bug. He returned to the All-Star team after his one-year absence.

2001 witnessed Kiyohara go deep 29 times, the most in 4 seasons, as his stats improved to .298/.396/.545. Kiyohara teamed with Matsui, third baseman Akira Etoh and rightfielder Yoshinobu Takahashi to enable the Giants to mount a powerful offense, but failed to take the Central League title, which was seized by Yakult. Kiyohara, though, suffered knee and hamstring problems, but he still topped .300 for the first time in 12 years to the tune of .318/.414/.568. He did that in just 148 AB; he hit 12 homers and just 1 double in 55 games. Despite his limited time, he made his 16th All-Star squad. The Giants again won the Japan Series that year in a sweep of the Seibu Lions, Kiyohara's 8th time playing for the Series champs.

In 2003, Kiyohara again fell from the All-Star team despite a very good year - .290/.390/.545 with 26 HR in 341 AB. The Giants, never satisfied with the amount of star talent on the team, picked up former MVP Roberto Petagine from Yakult to play both first and the outfield and Kiyohara, who was dogged by more leg problems, was back on the bench, hitting .228/.350/.604 - he went down on strikes 41 times in 101 at-bats, though he also homered 12 times (just 2 doubles; he hadn't hit a triple since 1995). The Giants, with Kiyohara, Petagine, Takahashi, Tuffy Rhodes, Hiroki Kokubo and Shinnosuke Abe, set a new NPB record for homers by a team, but their lack of pitching and OBP led to a 3rd-place finish.

In the offseason, Petagine became upset with how he was being treated and returned to America with the Boston Red Sox, giving Kiyohara his job back in 2005. Kiyohara was voted back into the All-Star game by the fans and he continued to build his impressive All-Star resume in his 17th time on the team (1st all-time in RBI in an All-Star game [34], in TB [96] and EBH [23] and tied for the most runs [26]). He also took part in a celebrated match-up against Kazuhiro Sasaki in Sasaki's final outing. He fanned 111 times in 321 AB in 2005 and hit 22 homers (just 6 doubles, no triples); overall he was at .212/.317/.436 - he was not hitting with enough power or drawing enough walks to compensate for his dipping average. Kiyohara injured his left knee in August and had endoscopic surgery, ending his season early. Yomiuri released Kiyohara late in the season - he had been the subject of criticism for his lack of support for team policy as well as his declining production. After the season, he signed with the Orix Buffaloes. In January of 2006 Kiyohara was honored with a Best Dresser Award by the Japan Jewelers Association.

Kazuhiro was hampered by injuries again in 2006 but was Orix's most frequently used DH and often hit cleanup still. He batted .222/.340/.419 in 67 games. 2007 was cut short by injuries as well, as Kiyohara had endoscopic surgery on his left knee prior to the season and missed the entire campaign. He attempted a comeback in 2008 and returned to NPB in August for his first appearance in NPB in two years. He announced he would retire following the season.

Kiyohara has always had a somewhat seedy life. Known as the "The King of Roppongi (an area of Tokyo riven with pickup bars and nightclubs)," he has been a favorite target for tabloids due to his frequenting of "high-end hostess clubs" (to use Bob Whiting's term) and long-standing rumors of ties with gangsters. While he has also sought to cleanse himself at Zen temples, the criticism has grown as his production has fallen. Additionally, once steroid rumors became the rage in Major League Baseball, rumors began circulating overseas. Kiyohara was a frequent suspect due to his increased size (though almost all sluggers expand with age).

With 525 career homers, Kiyohara has moved up to 5th all-time in NPB despite having never led his league. He needs 11 more to tie for 4th Koji Yamamoto, but 3rd place would seem to be out of reach (Hiromitsu Kadota with 567). Kiyohara is first all-time with 12 sayanora homers, breaking Katsuya Nomura's record in 2006. He is in the top 10 in RBI, total bases, 3rd in walks and the all-time leader in getting hit by pitches and strikeouts.

Sources: Remembering Japanese Baseball by Rob Fitts, The Meaning of Ichiro by Robert Whiting, japanbaseballdaily.com by Gary Garland and www.japanesebaseball.com by Michael Westbay

Another Kiyohara fan site, with a few pictures (also in Japanese)

An article on Kiyohara from the 90s