First baseman Orestes Destrade played a handful of games for the New York Yankees and Pittsburgh Pirates in the 1980s. In 1989, the Pirates sold his contract to the Seibu Lions of Japan. Destrade became an immediate sensation in Japan and hit .257/.379/.627 in 83 games that year. He won the home run title the next three years, becoming the first foreign player to do so. His teammate Kazuhiro Kiyohara was his big rival and never topped Destrade in homers - Destrade credits this as having helped humble the arrogant slugger. Destrade made three straight Best Nine teams in this period and led the league twice in RBI and walks (drawing 100 in 1991, to post a .404 OBP to go with a .584 slugging percentage - he hit in the .260s each year or else he would have been an MVP candidate. In 1990, he was named MVP - of the Japan Series; Seibu won three straight Series with Koji Akiyama, Kiyohara and Destrade in the heart of the order. Destrade became the only player ever to homer in his first series plate appearance 3 years in a row, accomplishing this feat versus the Tokyo Giants in 1990, the Hiroshima Carp in 1991 and the Yakult Swallows in 1992. Also, in 1992, he was named Tokyo Sportsman of the Year. That season he made his only Pacific League All-Star team. He became famous for his "guts pose" after hitting homers. Several Major League Baseball teams offered Destrade contracts during this time, but he kept turning them down. 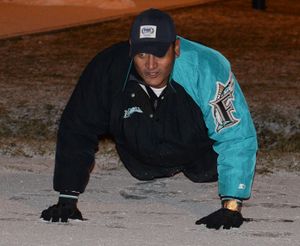 Destrade doing push-ups with troops in Germany in 2013.

When Cecil Fielder found success after playing in Japan, the Florida Marlins tried to duplicate it and signed Destrade in time for their inaugural year in 1993. They also figured his Cuban heritage would help draw Cuban fans from Miami to the ballpark. Destrade returned home to be closer to his family. He performed fairly well in 1993, hitting 20 homers and leading the expansion Marlins in homers and RBI. However, Destrade struggled in 1994, batting only .208, and was let go by the Marlins in June.

Destrade made his debut as a baseball commentator in 1994, when he was brought in to do guest work on the Japan Series. In 1995, Destrade was offered one of the largest contracts ever to return to Japan. His skills had faded as he only hit .245/.340/.405. He also became the first non-pitcher to take the mound for Seibu in 17 years, allowing a triple and two walks. Destrade asked Seibu for a leave of absence and returned to the U.S. for a week. He then retired, causing a good deal of conflict with the Lions, who felt like he had gone back on his contract and betrayed them. Destrade would never play pro ball again.

In 1995, Destrade published his autobiography in Japan. Late in 1996, he was hired by the Tampa Bay Devil Rays as an ambassador to the Cuban community, a job he held for 3 years.

Destrade hosted, along with Mark Patrick and Buck Martinez, XM Satellite Radio's "MLB: Baseball this Morning (from Monday to Friday, 6 am-9 am EST). Destrade, also joined ESPN's Baseball Tonight as a regular analyst in August 2005.