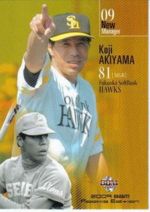 Probably the greatest player in Nippon Pro Baseball to go undrafted during the draft era, Koji Akiyama signed with the Seibu Lions after a tryout. Known as an excellent athlete and five-tool player, Akiyama spent his first three years primarily in the minors (in 1983 he played with the San Jose Bees and hit .258/~.360/.362 in 88 games). In 1982 he won an Eastern League home run title. By 1985 he was up with the Lions as a 3B. In his first season as a starter he hit 40 home runs, batted .252/.343/.543 and stole 17 bases and made the first of 18 consecutive All-Star teams, though he also struck out a league-high 115 times. A year later Akiyama topped 20 steals and hit 41 home runs, driving in 115. That season he hit a key homer in the deciding game of the Japan Series and did a backflip at home plate afterwards. The showy antics of Akiyama were a constant - when he hit a game-ending homer, he would do cartwheels and somersaults. While dramatic on the field, Akiyama was somewhat introverted and reserved off the field. That year he also made the first of 8 consecutive Best Nine teams.

In '87, Akiyama was converted to the outfield, where he became known for his acrobatic catches. That season he hit .262/.359/.556 and led the Pacific League with 43 HR. He also stole 38 bases in 50 attempts and won a Gold Glove; due to his wonderful performance on many fronts he won the MVP award that season. He became the second 40-30 man in the history of NPB. The Gold Glove was one of 11 in a row captured by Akiyama. Akiyama also set a record with game-winning hits in five consecutive games that season.

In 1990 Akiyama became the first player in the history of NPB to win both a homer and steal title, as he led the Pacific League with 51 stolen bases (in 60 tries). A year later he led the league in yet another department, slugging, with a line of .297/.369/.591 - his 35 home runs were 4 shy of teammate and league leader Orestes Destrade. The Akiyama-Destrade-Kazuhiro Kiyohara combination set an NPB record for homers by a trio and Seibu won the second of three straight Japan Series; Akiyama was the MVP of this Series. That season Akiyama had a consecutive-game streak snapped at 833. He led the league in yet another category (runs, 97) and again led in total bases (269). In the second 1991 NPB All-Star Game, Akiyama had to leave when a foul ball hit his face. As it was the 12th inning, he was replaced in left field by a pitcher, Kimiyasu Kudoh. He also won the Matsutaro Shoriki Award.

1992 saw Akiyama's sixth Japan Series win in his first 8 seasons. He hit 30+ homers for the 8th consecutive year. For the second straight season, he led the Pacific League in runs (92, presumably helped by having Destrade and Kiyohara behind him).

Injuries began taking their toll in 1994 in the form of back and knee problems. Akiyama had been traded after the '93 season to the Daiei Hawks in a 6-player deal with Takehiro Hashimoto and Katsuyoshi Murata for Makoto Sasaki, Tomio Watanabe and Tomoyuki Uchiyama. His home run total fell to 24 and he hit .254/.370/.482. He was second to Ichiro Suzuki in the Pacific League with 93 runs, third in steals with 26 and walked 83 times (a career high, third in the league) as he was still a valuable offensive threat, if no longer Best Nine material. It would be his last 20-steal season. He also set an NPB record that year by having extra-base hits in 11 straight games. For just the second time in his career Akiyama did not play in the Japan Series, as his old Lions made it without him.

In 1999 the fading legend was injured by a Daisuke Matsuzaka fastball to the face, knocking him out of action for a week. After 2 years without a Gold Glove, he picked up his 12th such award that year. Akiyama made his return to the Japan Series that year and helped Daiei to their first title in 26 years. He led off the Series with a homer, connected for another in game two and then in game three made a catch while running into the right field wall, then threw out the runner at first. His fine work that Series showed that he could still perform and won him his second Japan Series MVP. He became the first player to win Japan Series MVPs for two different teams. He was the oldest Japan Series MVP to that point; in 2011, he was surpassed by Hiroki Kokubo but can't have been too upset about it as he was Kokubo's manager when the Hawks won it all.

Akiyama, in 2003, convinced Hideki Matsui to give Major League Baseball a chance, saying he regretted never giving MLB an opportunity (though by the time he could have done so, he was fading rapidly). Many gaijin in the '80s attest to the fact that Akiyama could have played well in the majors - Leron Lee, Ralph Bryant, Destrade and many more have argued that his combination of speed, power, defense and some contact hitting would have been ideal for MLB. Unfortunately we never got a chance to find out.

In 2014, Akiyama was voted into the Japanese Baseball Hall of Fame alongside Hideo Nomo, Kazuhiro Sasaki and Choichi Aida. He managed Softbank to another PL title that year at 78-60-6 then guided them past the Hanshin Tigers to win the 2014 Japan Series. During the playoffs, he announced he would step down at season's end, going out a champion as a result. He won his third Matsutaro Shoriki Award, tying Tatsunori Hara for second all-time behind Oh (4).