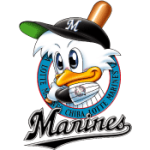 The Chiba Lotte Marines began their franchise in 1950, with the birth of the Pacific League. The Marines were then known as the Mainichi Orions and won the inaugural Japan Series. Since 1992, they have been the Chiba Lotte Marines. They have not duplicated their initial success - they made the Japan Series in 1960 and 1970, only to lose both years. In 1974, they beat the Chunichi Dragons; they were the first Pacific League team in 10 years to win the Series as the Yomiuri Giants had claimed the prior nine titles behind the Oh-Nagashima attack. The Marines' Korean-based parent company, Lotte, also owns the Lotte Giants of the Korea Baseball Organization.

After that the team failed to go to the Japan Series again till 2005. They had started the '05 season in first, fell behind the Softbank Hawks as the year progressed but then beat Softbank 3 games to 2 in the Pacific League championship. In the final game, they trailed 2-1 entering the 8th but Hatsushiba singled and Fukuura singled. Saburo Omura popped up but Tomoya Satozaki doubled off of closer Takahiro Mahara, scoring both runs to take the lead for good. After a 31-year absence, the team returned to the Japan Series, the first time as the Chiba Lotte Marines in 14 seasons with that name. They then took the first three games from the Hanshin Tigers by a combined score of 30-2 before finishing the sweep with a 3-2 win.