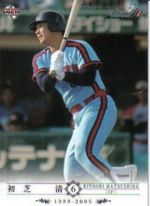 In 1993, the 26-year-old picked it up a bit to .251/.314/.410. '94 finally saw Kiyoshi develop, batting .290/.342/.483 with 31 doubles, 17 homers and 75 RBI. He made his first PL All-Star team. Hatsushiba had his best season in 1995, expressing enthusiasm at the new style brought in by manager Bobby Valentine. He said "Under Valentine, we became winners for the first time in my career...It was fun playing for him." Kiyoshi produced at a .301/.358/.546 clip with 25 homers and 80 RBI. His 7 sacrifice flies led the league, he tied for third in homers (only three behind leader Hiroki Kokubo) and tied for the RBI lead with Ichiro Suzuki and Yukio Tanaka; the 80 was the lowest league-leading RBI total in PL history. Hatsushiba made the Best Nine as the top third baseman in the league for the only time in his career.

In his first season as a sub, Kiyoshi tied a Nippon Pro Baseball record by having hits in seven straight at-bats as a pinch-hitter in September. Overall, he hit a rejuvenated .312/.356/.528 in his new role. In 2004, Hatsushiba hit .282/.319/.465 as a very effective pinch-hitter and backup at DH and 3B behind Seung-Yeop Lee and Matt Franco respectively. He was also reunited with Valentine, back for a second tour of duty.

Kiyoshi's last year as a player saw him produce at a .220/.286/.320 line, only playing 13 games in the field as Toshiaki Imae now manned third. Chiba Lotte won their first pennant as Hatsushiba finally tasted victory for the first time in his 17-year career. It would not have been possible without him. In the decisive game five of the Pacific League playoffs, the Marines trailed the SoftBank Hawks 2 to 1 in the 8th inning against Koji Mise. Hatsushiba entered as a pinch-hitter and singled. That began a flurry of three more hits as Fukuura singled. After one out against reliever Takahiro Mahara, catcher Tomoya Satozaki doubled home both runners for a 3-2 edge which would stand up, earning the Marines a trip to their first Japan Series. Kiyoshi was 0 for 1 in the only Japan Series game of his career.

After retiring, Hatsushiba became a coach on Valentine's staff.

Sources include Japanbaseballdaily.com by Gary Garland and The Meaning of Ichiro by Robert Whiting