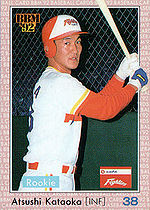 Atsushi Kataoka was a five-time All-Star, playing primarily third base, for the Nippon Ham Fighters who later joined the Hanshin Tigers and made another All-Star roster.

In high school, Kataoka hit cleanup for the great PL Gakuen High School clubs that won the 1987 spring Koshien and 1987 summer Koshien. In college, he won a batting title in the Kansai Big Six University League and was repeatedly chosen to the Best Nines. He was picked by Nippon Ham in the second round of the 1991 NPB draft.

Kataoka's best season came at age 28-29 in 1998 with a .300/.434/.470 line. His 113 walks were a new Pacific League record, breaking Kazuhiro Kiyohara's mark of 105, though he was far shy of Sadaharu Oh's Nippon Pro Baseball record. He led the PL in OBP (23 points ahead of Ichiro and more than 50 over third place), made his third All-Star team, won his third and last Gold Glove and made his second and last Best Nine. His 89 runs were second in the league to Kazuo Matsui (92) and he drew 28 more walks than runner-up Yasuo Fujii.

Kataoka's production fell significantly in 2001 as he hit .254/.346/.424 with only 57 walks. He still smacked 16 homers but his doubles were almost half of his prior season's production.

Becoming a free agent, Kataoka signed with Hanshin Tigers. He only had 11 homers and 53 walks while striking out a career-high 110 times but still made his final All-Star team, this time in the Central League. He hit just .228/.317/.346 that season. He had one last resurgent season in 2003 with a strong .296/.366/.497 campaign in which he also showed fine defense (Kazuyoshi Tatsunami won the Gold Glove that year). He was 1 for 9 with two walks in the 2003 Japan Series.

After he fell even further in 2006 (.148/.205/.208 as of September 26) and announced he would retire at year's end. He was proclaimed as one of the biggest free agent busts in NPB history by Gary Garland, a Japanese baseball analyst. It was rumored that Kataoka would become an announcer.