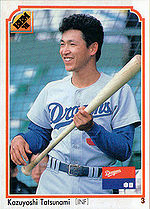 The number one draft choice of the Chunichi Dragons in 1988, Kazuyoshi Tatsunami contributed little his first two seasons but then hit .303/.381/.456 in '90. The next season the second baseman led the Central League with 87 runs scored - he hit .290/.379/.423 with 35 doubles, which would resemble his typical season during his career. In '94, Tatsunami again led the Central in runs, this time with 90. In 1996 he made his first Best Nine, at 2B, when he hit .323/.404/.466; he was third in the league in average, second in hits (165) and second in doubles (39). Tatsunami lost his driver's license in 2003 due to too many speeding incidents. In 2004 he made his second Best Nine, this time at third base, after hitting .308/.364/.384 - the numbers are deceptive as Chunichi played in a very pitcher-friendly environment. When Kosuke Fukudome was injured in the pennant race, Tatsunami and Alex Ochoa picked up the slack to lead the team to the Japan Series, which they lost in seven games to the Seibu Lions. In 2005 Tatsunami slipped, having his worst season since his teens as he hit .253/.345/.361; he broke into the record books when he hit his 450th double on May 19, giving him the all-time mark for Nippon Pro Baseball; the prior record holder was Yutaka Fukumoto. After the year his salary was reduced to around $2 million and he said he would retire after 2006 unless he had a very good season.

A leader for the Dragons for 15 years, Tatsunami has filled in wherever needed, playing second, third and the outfield and batting at the top of the order and in the heart of the order. His 2,346 hits rank 11th in NPB history; his 1,149 runs place him 16th and his 983 walks are 11th. He had his 172nd 3-hit game in 2006, passing Sadaharu Oh for second all-time in the Central League, behind only Shigeo Nagashima (186). Not bad for a guy who had only two Best Nine seasons and played in a pitcher's paradise a great deal. The multi-talented Tatsunami is an example of a player who does everything well - some power, some speed, some walks and some contact - but has no trademark skill to make him stand out from the crowd. Perhaps his all-time doubles record will earn him the attention he warrants. Alonzo Powell commented that "there's no doubt that he could play in the Major Leagues."

In 2009, Tatsunami became the 7th NPB player to reach 10,000 plate appearances. He was elected to the Japanese Baseball Hall of Fame in 2019.