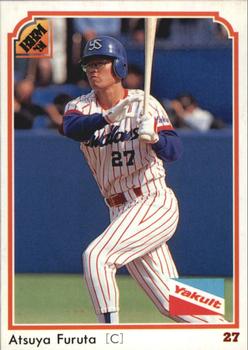 Atsuya Furuta is the former catcher and manager of the Tokyo Yakult Swallows. A player on the Japanese team in the 1988 Olympics, he was voted the greatest catcher in Nippon Pro Baseball history in 2000. He was the first person to hit for the cycle in an All-Star Game in Japan. He was the first catcher to win a batting title in the Central League. A two-time Central League MVP, he has also won the Matsutaro Shoriki Award. One of the few players to hit four home runs in a game in NPB, Furuta has battled knee problems for years. He became Japan's first player-manager in three decades when he took over the reigns of the Swallows in 2006.

Selected as a national All-Star in college, Furuta went undrafted, perhaps due to his wearing of glasses. He went to play in Japan's independent industrial leagues for Toyota Motors and went on to one of the best careers of anyone who ever played in those leagues. In 1988, he played on Japan's Olympic team and won a silver medal. In the 1988 Baseball World Cup, Furuta hit .346/.379/.423 as Japan's catcher. He helped Japan win a Silver at the 1989 Intercontinental Cup.

Furuta finally made it to the big time at age 24 with the Yakult Swallows and as a rookie won a Gold Glove and became the first rookie All-Star catcher in 21 years. He only hit .250/.353/.332 that season.

The Swallows catcher saw his career take off in 1991 - he hit .340/.429/.500 to win the batting title, the first catcher to do so in the Central League in the two-league era which had begun in 1950. He again picked up a Gold Glove and an All-Star spot and was named to the Best Nine team for the first time. In the first 1991 All-Star Game, he threw out all three Pacific League baserunners who tried to steal and was named the MVP of a 1-0 game. 1992 saw Furuta sacrifice some contact for a great deal of power - he slugged .316/.422/.576 with 30 home runs. He led the Central League with 273 total bases, won another Gold Glove, made another All-Star team and another Best Nine. That year he also became the first player to hit for a cycle in the All-Star game; no one else matched his feat until Koji Chikamoto 27 years later. [1] He won the All-Star Game MVP for the second straight year.

1996 continued what would be a Bret Saberhagen-esque stretch of great seasons followed by poor ones (Yakult's success would mirror Furuta's production). He hit .256/.332/.396. He continued his errorless streak up to 1,046 chances before it was broken and again was an All-Star.

Furuta again had a rebound year in an odd-numbered season the next year. Again leading Yakult to a Japan Series title, Furuta hit .322/.413/.446; he was 3rd in hitting, 3rd in OBP, 3rd in hits and 2nd in doubles. He was named to the Best Nine for the 5th time, won his 6th Gold Glove, made his 8th All-Star team. Additionally, he won his second MVP award amd won a Matsutaro Shoriki Award that year. In the 1997 Japan Series, he hit .316/.381/.579 to win the MVP honors.

In a poll in 2000 to pick Japan's All-Century team, he was voted the greatest catcher in the history of Japanese baseball. While Katsuya Nomura and Kenji Johjima both have solid cases (especially Nomura, Furuta's one-time manager), Furuta is clearly one of the greatest Japanese catchers ever.

Furuta won his ninth Gold Glove in 2001, made his 12th trip to the All-Star game and was on the Best Nine for the 8th time. This tied Masahiko Mori's Central League record for Best Nines by a catcher. Furuta batted .324/.390/.478. Yakult won their fourth Japan Series with Furuta that season - the team had won none before his appearance. He had his second MVP Award in a Series, hitting .500/.618/.857 in the 2001 Japan Series with 7 walks and 5 runs in 3 games.

In 2004 Furuta again topped 20 long balls (24) and he hit .306/.365/.503 - his second highest slugging percentage ever. He made his 15th consecutive All-Star appearance but Abe again won the Best Nine at catcher. He made the news more for his role off the field, though - as the president of the Japan Professional Baseball Players Association (from 1998-2005), he arranged the first strike in the history of NPB in protest of the planned merger between the Orix Blue Wave and Kintetsu Buffaloes. With overwhelming fan support, the players won several concessions from the owners, including the development of an expansion team, the Rakuten Golden Eagles.

2005 saw Furuta's health continue to decline and he reached 40 years of age. His .255/.308/.342 line (as of early October) was the second-worst of his career. He still made his 16th straight All-Star game, still having not missed an All-Star spot. He also became the second catcher (after Nomura) in NPB history to reach 2,000 career hits; he was also the second Swallow to reach that figure. He was the 32nd player overall to 2,000 hits. Additionally he became the 27th player to 1,000 RBI and the second catcher (again, after Nomura), on October 5.

The biggest question is how good Furuta could have been as a player had he been drafted out of college instead of allowed to go to the industrial leagues instead.

Furuta has become the new manager for the Swallows in 2006, he became the first player-manager in NPB since Katsuya Nomura in 1976 (it would only be 8 years after Furuta before another catcher, Motonobu Tanishige, took on the same role). On May 2 he delivered a sayonara, pinch-hit single, the first sayonara hit by a player-manager in the Central League since Fumio Fujimura in 1956. As a manager, he decreased his team's usage of sacrifice hits significantly, an unusual move in bunt-loving NPB. He said that as a catcher, he felt bunts drew an inning closer to completion without hurting his team much. This attitude showed a shift from traditional to results-oriented thinking. The approach backfired as his team laid down 99 sacrifices (4th in the league) but failed in 39 cases, the most in the league. Furuta promised more bunting practice the next year. Yakult finished 70-73-3, third in the CL. He hit .244/.299/.300 in a significantly reduced role (90 AB, 36 G), showing the courage to bench himself lacking in recent player-managers like Pete Rose. His career line through 2006 was .294/.367/.442. After the year, he took a NPB-record 75% pay cut as a player, to 60 million yen, though he also made 100 million yen as the manager.

On June 10, 2007, he removed himself from the active roster. He had only played two games all year. Some sources announced it as a retirement from playing but he returned to play 10 games for the year, going 6 for 18 with a double and a walk. In September, he announced that he was retiring as both player and manager. Shigeru Takada was hired to replace him as manager. The Swallows finished last in the Central League despite an outfield of batting champ Norichika Aoki, RBI leader Alex Ramirez and 35-home-run man Aaron Guiel. They had a better run differential than the Hanshin Tigers, who made the playoffs. During the rough 2007 campaign, Furuta announced that the season would be his last in NPB. The 27 years he spent with the Swallows was eerily similar to the iconic number 27 on his uniform.

Furuta has also appeared in a couple TV programs.

He made the Japanese Baseball Hall of Fame on the third ballot, in 2015, the lone player inducted that year.