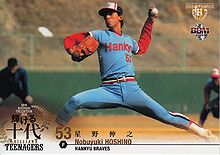 Nobuyuki Hoshino pitched for 18 seasons in Nippon Pro Baseball and made seven All-Star teams. He was an Opening Day starter eight times. His fastball peaked at only 85 mph.

The Orix hurler slipped to 14-9, 4.02 in 1990 and gave up 33 home runs, tying Hideyuki Awano for the PL lead. That year, he was embarrassed by his catcher Satoshi Nakajima, who caught one of Hoshino's slow curves and fired the ball back to the mound, causing both teams to erupt in laughter. Despite Hoshino's anger over the stunt, Nakajima would repeat it in bullpen sessions. He rebounded to 16-10, 3.53 with a save in 1991 and made his fourth All-Star team while finishing 10th in ERA.

In 1995, the crafty southpaw turned in a 11-8 record with a 3.39 ERA. He returned to his old familiar spot of #10 in the PL in ERA and made his 5th All-Star team. In the 1995 Japan Series, he allowed one run in 4 1/3 innings as Orix fell to the Yakult Swallows. Hoshino improved to 13-5, 3.05 in 1996 while making his sixth All-Star squad. He was 5th in ERA between Yukihiro Nishizaki and Koji Noda. He started games one and five of the 1996 Japan Series, allowing three runs in eight total innings and getting two no-decisions, as the BlueWave won their only Japan Series title.