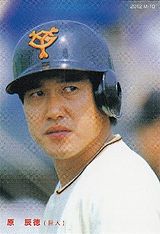 Tatsunori Hara was one of the most-hyped players in Nippon Pro Baseball in the 1980s. The son of high school coach Mitsugu Hara, Tatsunori was taught baseball starting at age three, using rigorous training methods. A star in college, he won two triple crowns in the Tohto League. He helped the Japanese national team win a Bronze in the 1980 Amateur World Series. 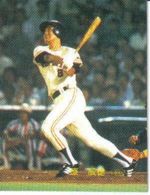 In 1981 he was drafted in the first round by the Yomiuri Giants to replace retiree Sadaharu Oh as the cleanup hitter. Hara had a fine rookie year, hitting .268/.308/.483 and tying a rookie record with 7 RBI in a game. Hara hit 22 homers and the third baseman won Rookie of the Year honors in the Central League. The Yomiuri front office got daily marriage proposals from female admirers and Hara rebuffed offers from film studios looking to capitalize on his charisma and popularity. He was voted as Japan's top male symbol of 1981.

In 1982 Hara drilled 33 homers, hitting .275/.332/.518, two behind league leader Masayuki Kakefu. The next year, he kept on improving, batting .302/.375/.574 and leading the league in runs (94), RBI (103) and total bases (287). He homered 32 times, four less than co-leaders Koji Yamamoto and Yasunori Oshima. Hara was named MVP of the Central League that year and made his first Best Nine. He would never lead the league in a major offensive statistic again after being the hope of the most popular team in Japan at that time. His failure to live up to hopes led critics to claim Hara was soft from the media. Numerous training regimes and coaches were implemented to try to improve Hara. American teammates like Reggie Smith and Warren Cromartie argued that he was overcoached and should have been allowed to continue with what he had worked for him.

In 1986 Tatsunori batted .283/.363/.616 with 36 homers in 113 games. It was his top season in terms of homers hit or slugging percentage. Hara wasn't close to the league lead though - 11 homers and 160 slugging points behind Randy Bass, in the middle of a Triple Crown season. Leon Lee beat out Hara for the Best Nine - one of the top prospects in Japan had made just one Best Nine team in 6 years, losing out to Kakefu three times, Lee once and Sachio Kinugasa once.

After retiring as a player Hara worked for three years (1996-1998) as a baseball commentator, coached for Yomiuri from 1999-2001 and became the Giants manager in 2002. That season the club went 86-52-2, easily won the Central League pennant and swept the Japan Series. Hara won the Matsutaro Shoriki Award that year. The club slipped to 71-66-3 in 2003 and fell to a tie for third. Hara quit the team when Giants owner Tsuneo Watanabe meddled in the coaching staff. When Hara's replacement Tsuneo Horiuchi failed to improve the club, Tatsunori was rehired in 2006 - due to the meddling of Watanabe, who was back in power. He led the Giants to the best record in the Central League in 2007 and 2008.

Hara was named as Japan's manager for the 2009 World Baseball Classic and guided them to their second straight World Baseball Classic title. He ended the year with another title, leading the Giants to the 2009 Japan Series, their first Series win in seven years. He won his second Matsutaro Shoriki Award for his work. He also led them to a title in the 2012 Japan Series and to the 2013 Japan Series, where they fell. After a ten-year stint at the reigns of Yomiuri, he was replaced by Yoshinobu Takahashi, having held the post for the longest period since Tetsuharu Kawakami (1961-1974).

His nephew Tomoyuki Sugano played for him starting in 2013. His father, Mitsugu Hara, served as head coach at Tokai University.

He was elected to the Japanese Baseball Hall of Fame by the Expert Division (the veteran's committee equivalent) in 2018 in a class with Hideki Matsui and Tomoaki Kanemoto from the Players Division and Masao Taki from the Special Committee. He was only gone from the Yomiuri helm for three years as he took back over from Yoshinobu Takahashi in 2019, taking Yomiuri to the 2019 Japan Series his first year back after 3 seasons around .500 when he was away.

Main Sources: "You Gotta Have Wa" by Robert Whiting, japanbaseballdaily.com by Gary Garland