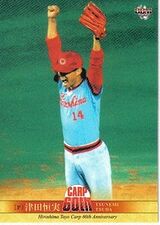 Tsunemi Tsuda was a five-time All-Star in 10 seasons with the Hiroshima Carp.

Tsuda threw a perfect game in high school. After playing for Kyowa Hakko in the industrial leagues, he was a first-round pick of the Carp in 1981. He debuted in 1982, going 11-6 with a 3.88 ERA. He was named the Central League Rookie of the Year.

Tsuda became the Carp's closer in 1986 and did very well, going 4-6 with 22 saves and a 2.08 ERA, striking out 81 in 69 1/3 IP while allowing only 44 hits. He saved game three and won game four of the 1986 Japan Series but Hiroshima fell to the Seibu Lions. Tsuda led the Carp with five appearances in the Series, tossing 5 1/3 shutout innings against a powerful offense featuring Koji Akiyama, Hiromichi Ishige and Kazuhiro Kiyohara. He made his second CL All-Star team that year and was named Comeback Player of the Year.

Tsuda had his best season in 1989 when he was 12-5 with 28 saves and only 50 hits allowed (4 homers) in 83 innings. He posted a 1.63 ERA and made his fifth All-Star team. He led the CL in both saves and save points and was named the league's Fireman of the Year for the only time.

Tsuda died of a brain tumor two years later, only 32 years old. The story of his life was told in a Japanese TV drama.

In 2012, he was voted into the Japanese Baseball Hall of Fame alongside Manabu Kitabeppu on the Sportswriter Committee.

This biographical article is missing the person's: death place
Retrieved from "https://www.baseball-reference.com/bpv/index.php?title=Tsunemi_Tsuda&oldid=1259236"
Categories: