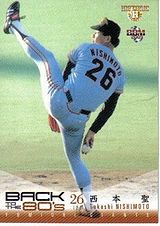 Takashi Nishimoto was a eight-time All-Star pitcher in Nippon Pro Baseball and won both the Sawamura Award and a Japan Series MVP. His brother Akikazu Nishimoto also pitched in NPB.

Nishimoto tried out with the Yomiuri Giants after high school and was signed as an undrafted free agent; the team planned to use him as an infielder. While his bat would not impress (.154/.171/.229 for his career), he would emerge as a star hurler. He was originally used as a batting practice pitcher but fared well enough that they started using him in games in 1976. That year, he led the Eastern League in wins. He allowed three runs in one inning with the big club that year.

By 1977, Nishimoto was being used regularly as a Yomiuri reliever. He went 8-5 with 4 saves and a 2.67 ERA. Had he qualified, he would have ranked second in the Central League in ERA behind Hisao Niura. He was 4-3 with two saves and a 3.76 ERA in 56 games in 1978. Takashi followed with a 8-4, 2.76 campaign with six saves in 1979. He won the Diamond Glove Award as the best defensive pitcher in the CL. He also tied a NPB record by hitting three batters in an inning on August 1. He also nearly ended Sachio Kinugasa's consecutive games played streak at 1,123 games, hitting Kinugasa in the back; Sachio continued his streak despite medical advice to the contrary. He finished second in the league in ERA, behind Masaji Hiramatsu.

The Ehime native was being used primarily as a starter by 1980, going 14-14 with two saves and a 2.59 ERA. He walked only 40 in 222 innings and made his first CL All-Star team. He won his second Diamond Glove. He finished fourth in ERA behind Hiroshi Matsuoka, Suguru Egawa and Shoji Sadaoka.

The right-hander missed part of the preseason in 1981 when his wife was hurt badly in a gas explosion at their house. He returned to win on Opening Day; he gave his wife the game ball. He would go 18-12 with a 2.58 ERA in 1981. He led the CL in innings (257 2/3), batters faced (1,020) and hits allowed (232). He was again second in ERA, this time behind Egawa. He made his second All-Star team and won his third Diamond Glove. Even though fellow Giants pitcher Egawa was named Central League MVP, Nishimoto was named the winner of the Sawamura Award as the top pitcher in Japan. In the 1981 Japan Series, he became the first pitcher to fan at least one batter per inning in a Japan Series game. It would be 27 years before Takayuki Kishi became the second. He would beat the Nippon Ham Fighters in both games 2 and 5, both complete games; he allowed only one run and won Series MVP honors.

Regarding his Sawamura Award battle with Egawa - it was rumored that the two were rivals, but they were actually friends. Nishimoto used Egawa's performance as an incentive to do better himself. One time, both hurlers threw 330 pitches in a spring training session to try to outdo each other; catcher Kazuhiro Yamakura finally had to call and end to it.

In 1982, the 25/26-year-old was 15-10 with a save and a 2.58 ERA. He led the league in batters faced (1,093) and hits allowed (253), made his third straight All-Star team and won his fourth consecutive Diamond Glove. He finished 5th in the circuit in ERA behind Akio Saito, Egawa, Kazuyuki Yamamoto and Manabu Kitabeppu.

1983 marked a second straight 15-10 campaign, but this time with a loftier ERA (3.84). He was an All-Star and led in innings (239 1/3), hits (265), runs (116), earned runs allowed (102) and batters faced (1,013). He was again excellent in the Series, going 2-1 with a 0.92 ERA in the 1983 Japan Series. In 26 innings, he fanned 18 while walking only two. He shut out the Seibu Lions in game two and held them to two runs in a complete game three contests later, beating Naoki Takahashi both times. He relieved in game six with a 3-2 Series lead for Yomiuri and was worn out, giving up four hits in a row before Egawa blew it in relief. In game seven, Motoshi Fujita turned to him for the deciding contest despite his fatigue. He led 2-0 going into the 7th but Terry Whitfield hit a bases-loaded double to give Osamu Higashio the 3-2 victory. His 29 consecutive shutout innings in 1981-1983 were a Series record.

He had his third straight 15-win season at 15-11, 3.12 in 1984, making his fifth All-Star team in a row. He ranked fourth in ERA, trailing Seiji Kobayashi, Yutaka Ono and Tatsuo Komatsu. He won another Diamond Glove.

Due to conflict with pitching coach Mutsuo Minagawa, Nishimoto left Yomiuri after 13 seasons. Traded to the Chunichi Dragons, he had one last big year in 1989. He won his first Gold Glove (the renamed Diamond Glove) in four years, made his 7th All-Star team, tied Masaaki Saito for the CL lead in wins, led in hits allowed (231), tied for the lead in homers allowed (22, even with Hiroshi Nagatomi, Manabu Kitabeppu and Kazuhiko Endo) and led in hit batsmen (12). He was 4th in the league in ERA behind Saito, Hiromi Makihara and Yutaka Ono. He won Comeback Player of the Year honors. Saito would win the Sawamura Award.

The Orix BlueWave signed Takashi and he recovered somewhat (5-5, 4.41) in 1993 but was again released. Yomiuri signed him back. Pitching coach Tsuneo Horiuchi did not agree with the move and sent Nishimoto to the minors; he promptly retired.

Nishimoto threw a fastball, curveball, sinker and shuuto (his primary pitch). His delivery was said to be similar to Eiji Sawamura's.

After his playing career ended, he was a coach for the Hanshin Tigers and Chiba Lotte Marines. He also worked for Bunka Broadcasting and Nikkan Sports as a baseball commentator.