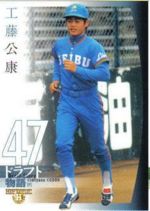 Kimiyasu Kudoh had one of the most successful careers by a pitcher in Nippon Pro Baseball. He was especially notable for his durability in a country where pitcher arm abuse is common.

Kudoh struck out 21 in a 12-inning game in the Koshien Tournament in 1981. He was drafted in the sixth round that year by the Seibu Lions and signed with the club after his father was given a job in the Prince hotel chain, owned by Lions owner Yoshiaki Tsutsumi. He pitched for the San Jose Bees of the American California League for part of the 1984 season, going 3-4 with a 1.91 ERA in 20 relief appearances. Used in a limited role as a reliever for his first three seasons, Kudoh became a star in 1985 when he won the first of 4 ERA titles (8-3, 2.76). In '86 he made the first of eight All-Star teams. That year he also was MVP of the Japan Series; he would win the same honor the next season. Overall he has played in 14 Japan Series.

1987 saw other highlights for Kudoh - setting a Seibu record with 15 strikeouts in a contest, winning the Matsutaro Shoriki Award and going 15-4 with a 2.41 ERA. Kudoh made his first Best Nine and won his second ERA title.

In '91, Kudoh went 16-3 with a 2.82 ERA but just missed a league lead in wins, as Hideo Nomo won 17 for the Kintetsu Buffaloes. Kudoh did claim his first shutout title, with 4. Two years later he again posted a dazzling record on the hill, going 15-3 with a 2.06 ERA. He earned his second Best Nine and also won his third ERA title. Additionally, Kudoh was named Pacific League MVP. He again failed to lead in wins, as Koji Noda and Nomo each won 17. In the All-Star Game that year, Kudoh made a rare appearance as a position player; in the 12th inning, left fielder Koji Akiyama was injured by a foul ball and the PL was apparently out of position player options.

Kudoh finished his Seibu tenure in 1994 with a Gold Glove - he had gone 103-52 with the club, appeared in 11 Japan Series and been on the winning club in 8 Japan Series. In 1995 Kudoh joined the Daiei Hawks and won another Gold Glove.

The 36-year-old Kudoh had a big year in 1999. He was 11-7 with a 2.38 ERA for Daiei that year. He won his fourth ERA title, his second strikeout title (a career-high 196 while walking just 34) and his third shutout crown, the last major categories he would lead in. He won his second MVP award as well in leading the Hawks to their first Japan Series in 26 years and was on his 9th Japan Series champion club. He also became the 16th pitcher in NPB history to strike out 2,000 batters.

Kudoh became one of the big free agent signees that off-season, switching to the Yomiuri Giants. His first year in the Central League Kudoh made the Best Nine as the top pitcher in the circuit. He led his team to the Japan Series and helped the Giants defeat his old teammates, the Hawks, for his 10th Japan Series title. He was 12-5 with a 3.11 ERA in the regular season and won his third Gold Glove. Never having swung a bat in the DH-using Pacific, Kudoh set a Central League record by going 84 consecutive at-bats without a hit; he did not reach successfully via base hit till July of his third year in the Central.

In 2004 Kudoh, no longer a star, was still setting records. At the age of 41 years and 11 months he became the oldest hurler in NPB history to fan 10 batters in a game. He became the 23rd pitcher in NPB history to reach 200 career wins, the first since Manabu Kitabeppu in 1992. The same game he won #200, he also hit his first career home run.

Kudoh, in 2005, went 11-9 with a 4.70 ERA, leading the Giants in victories and getting his 16th season with 10 or more. He became the oldest pitcher in NPB history to win double-digit games in a season; Masahiro Yamamoto broke the record 3 years later. The Giants re-signed Kudoh for 2006 and the 42-year old southpaw showed surprising optimism that he might pitch in the US majors some day. He went 3-2 with a 4.50 ERA in 13 games for the Giants that year. He signed with the Yokohama BayStars as compensation for losing pitcher Ken Kadokura to Yomiuri that off-season.

Kudoh picked up his first 2007 win on May 23, setting a NPB record for consecutive seasons with at least one victory (23). The old record-holder was Tetsuya Yoneda with 22. He posted a 7-6 record with a 3.91 ERA in 19 starts in 2007. After the season, he had endoscopic surgery on his pitching elbow.

With 215 career wins through 2006, Kudoh ranked tied for 15th in NPB history with Choji Murata and Shigeru Sugishita, while his 127 losses didn't even show up in the top 30. His 2,748 strikeouts were good for seventh all-time in Japan. Kudoh's ERA entering '05 was 3.29. He was a seeming lock for the Japanese Hall of Fame once he becomes eligible. In addition to never leading his league in victories, Kudoh also never won the Sawamura Award as the top pitcher in NPB.

From 2012-2014, he was a sports commentator. He was hired to manage the SoftBank Hawks, replacing Koji Akiyama in guiding a team that had just won the Japan Series. Kudoh did not skip a beat, taking them to the 2015 Japan Series title as a rookie manager and winning the Shoriki Award he had won 28 years prior. He joined Akiyama and Sadaharu Oh as the only people to win the awards as both a player and manager. He was inducted into the Japanese Baseball Hall of Fame in 2016. He led Softbank to titles in the 2017 Japan Series and 2018 Japan Series as well. He won his third Shoriki Award in 2018, tying Ichiro Suzuki, Tatsunori Hara and Akiyama for second all-time, one behind Oh. The Hawks then swept the 2019 Japan Series and 2020 Japan Series, the first team to sweep the Japan Series in consecutive years. He won the Shoriki Award both years, becoming the all-time leader.