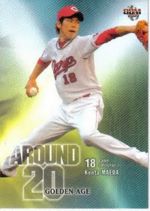 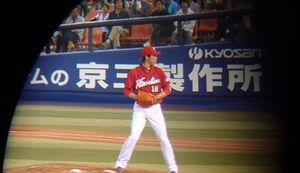 Kenta Maeda has pitched in Japan and MLB. Through 2015, he has won three ERA titles, two strikeout titles, led the league twice in wins and won two Sawamura Awards. He signed with the Los Angeles Dodgers in 2016.

Maeda was a first-round draft pick by the Hiroshima Carp in 2006 out of high school. After a year in the minors, he came up to the Carp in 2008. As a rookie, Maeda went 9-2 with a 3.20 ERA. He also hit .182, including a homer off Ryo Kawashima. Had he qualified, he would have tied Yuya Ando for 7th in the Central League.

In his second season, Maeda posted a 8-14, 3.36 record in 2009. Kenta was second in the league in losses, one behind Ryan Glynn. He was also third in innings (193), 3rd in hits allowed (194), 4th in homers (22), tied for 8th in complete games (3), tied Daisuke Miura for the most runs allowed (82), tied Kazuki Yoshimi for 3rd in strikeouts (147, trailing Colby Lewis and Atsushi Nomi) and tied Miura for second in earned runs allowed (72, trailing Masanori Ishikawa.

Maeda was far better in 2010, improving to 15-8 (on a 58-84 team) with a 2.21 ERA. He held opponents to a .215 average and 46 walks in 215 2/3 IP, for a WHIP under 1. He fanned 174 batters as well. He led the CL in ERA (.66 ahead of runner-up Wei-Yin Chen), innings, wins (one more than Yasutomo Kubo), complete games, strikeouts (11 more than Kyohei Muranaka), lowest opponent average and WHIP (.15 ahead of runner-up Kubo). He was second in shutouts (2, tied with Kenichi Nakata and Chen, behind Shohei Tateyama). He made his first All-Star team. He won the Sawamura Award (the award that goes to the top pitcher in Nippon Pro Baseball), the first Central Leaguer to do so since Kenshin Kawakami in 2004 and the first Carp hurler to win since Shinji Sasaoka in 1991.

On April 6, 2012, the Hiroshima hurler tossed a no-hitter against the Yokohama DeNA BayStars. He had a perfect game through five innings and walked only two in the whitewash, a 2-0 win. It was the first NPB no-hitter in the regular season since Masahiro Yamamoto threw one in 2006. He started 2012 NPB All-Star Game 2 and was nearly untouchable, allowing only a Kensuke Tanaka hit in three shutout innings. He was named game MVP, the first pitcher to be named NPB All-Star Game MVP since Daisuke Matsuzaka in 2004 and the first Carp hurler to do so since Yutaka Enatsu in 1980. He finished the year with a 14-7, 1.53 record. He led the CL in ERA (.45 ahead of Yusuke Nomura and Utsumi), was second in wins (one shy of Utsumi), ranked third with 5 complete games (one behind Miura and Yoshimi), tied for first with two shutouts, led in innings (206 1/3, 9 2/3 ahead of Randy Messenger) and was third in strikeouts (171, one shy of Nomi and Toshiya Sugiuchi). He won a Gold Glove but did not make the Best Nine (Utsumi got that) or Sawamura Award (Tadashi Settsu of the PL won). He was 6th in voting for the 2012 Central League Most Valuable Player Award, leading all Carp players.

Maeda was Japan's ace in the 2013 World Baseball Classic, going 2-1 with a 0.60 ERA, striking out 18 in 15 innings. He beat China (5 IP, 1 H, 1 BB, 0 R), with the only hit he allowed being a Lei Li double before Utsumi relieved in a 5-2 Japan win. In his next start, he was even better against the eventual #4 Dutch national team, fanning 9 in five shutout innings with no walks and just a single to Curt Smith in a lineup with six past, current or future MLB players. Japanese relievers, starting with Utsumi, gave up 4 runs in the next two frames of a mercy rule win. He was again good in his last game, allowing only one run in five innings (Mike Aviles singling in Irving Falu) against Puerto Rico in the semifinals, but lost as Mario Santiago tossed a gem in an upset. He finished the Classic first in strikeouts (one over Samuel Deduno) and innings (15, 1/3 over Diegomar Markwell) and tied for second in wins (with Deduno, Dany Betancourt, Nelson Figueroa and Markwell, one behind Pedro Strop). He had the lowest WHIP of any hurler with 8+ IP and only Betancourt and Chien-Ming Wang had better ERAs among those with ten or more innings pitched. He was named to the All-Tournament team, joining Figueroa and Fernando Rodney as the pitchers selected.

In 2013, he won his third ERA title in four years. He was 15-7 with a 2.10 ERA. In 2013 NPB All-Star Game 1, he started for the CL and allowed a first-inning run on a Nobuhiro Matsuda triple and Yoshio Itoi single then pitched a scoreless second before Hirokazu Sawamura relieved. It wound up being a 1-1 tie. He finished second in the CL in wins (one behind Yasuhiro Ogawa), led in ERA (.59 ahead of Nomi) and was second in strikeouts (158, 25 behind Messenger). He won both a Gold Glove and Best Nine nod, though lost the Sawamura to the PL's Masahiro Tanaka. He finished 6th in voting for the 2013 Central League Most Valuable Player Award.

Maeda became the first CL pitcher to start All-Star Games three straight seasons since Suguru Egawa (1980-1982) when he started 2014 NPB All-Star Game 2. He retired the first six, then allowed two hits in a scoreless third before Yudai Ono relieved. He fanned three on the day and got the win. He tied Enatsu for second-most wins by a starter in a NPB All-Star Game, one behind Hisashi Yamada. Overall, only Tetsuya Yoneda, Enatsu and Yamada had more wins. He did not win game MVP, which went to teammate Brad Eldred. He fell to 11-9, 2.60 in 2014, his worst finish in five years. He still was third in ERA (after Tomoyuki Sugano and Iwata), tied for fifth in wins (with Shoichi Ino and Shintaro Fujinami) and was third with 161 strikeouts (after Messenger and Fujinami).

In 2015, he rebounded to 15-8, 2.09. He also hit .194 with his second career home run. In 2015 NPB All-Star Game 2, he relieved Hiroki Kuroda in the third and tossed two shutout innings (allowing hits to Itoi and Kazuo Matsui) before Kenjiro Tanaka relieved. The CL won, 8-3, and he got his 4th All-Star Game win, tying Yoneda for third all-time, one behind Enatsu and three behind Yamada. He was on the CL leaderboard in ERA (4th, between Miles Mikolas and Fujinami), wins (first, one over Fujinami and Kris Johnson), complete games (5, 6th), innings (206 1/3, 2nd, 1 behind Ono) and strikeouts (175, 3rd after Fujinami and Messenger). He won his second Sawamura Award, joining Tanaka as the only two-time winners to that point in the 21st Century, something pitchers like Matsuzaka and Yu Darvish had never done. He also won a Best Nine nod and another Gold Glove.

Maeda was on the Japanese roster for the 2015 Premier 12, helping Japan to a bronze medal. He had a no-decision in his first start, versus Mexico (5 IP, 5 H, 1 BB , 2 R, 7 K) then beat Puerto Rico with a gem (7 IP, 4 H, 0 BB, 0 R, 7 K). He was 4th in the event in whiffs, between Chris Leroux and Alessandro Maestri. After the tournament, he told the Hiroshima Carp that he wanted to play in the U.S. major leagues in 2016 and asked for his name to be placed on the posting system, which was done on December 8th. However, the Carp indicated that they would only accept the maximum bid of $20 million, a clause that was likely to scare off potential bidders. On December 31st, rumors emerged that Maeda had signed an eight-year deal with the Los Angeles Dodgers, although this was not confirmed until January 7, 2016, when the Dodgers and Maeda held a press conference. The deal only included $25 million in guaranteed money over 8 years, but could be worth up to $106.2 million if Maeda were to earn various bonuses linked to durability. This unusual structure was decided in response to concerns about the future health of Kenta's pitching arm, as the physical exam conducted by the team had revealed potential concerns.

Maeda had an outstanding major league debut facing the San Diego Padres on April 6, 2016, as he pitched six scoreless innings (5 H, 0 BB, 4 K) and also hit a home run (off Andrew Cashner) before turning the ball over to Yimi Garcia as he was credited with a 7-0 win. He again pitched 6 innings without giving up a run in his second start,m although he was not involved in the decision, and in his third on April 17th, he was finally scored upon when Joe Panik of the San Francisco Giants hit a solo homer off him in the 3rd inning, but it was the only run he gave up in 7 innings as he won again. He was 2-0, 0.47 after those first three starts. The fourth, on April 23d, was just as good as he took a no-hitter into the 6th inning against the Colorado Rockies and again did not allow a run in a 4-1 win, to lower his ERA to a minuscule 0.36. He finished his rookie season with a record of 16-11, 3.48 in 32 starts, with 179 strikeouts in in 175 2/3 innings. He was named to the 2016 Topps All-Star Rookie Team. In the postseason, he lost his only start against the Washington Nationals in the Division Series, giving up 4 runs in 3 innings, but did not have a decision in 2 starts in the NLCS against the Chicago Cubs, allowing 4 runs in 7 2/3 innings.

Maeda had a higher ERA as a second-year player in 2017, as it went up to 4.22, but his record of 13-6 in 29 games remained excellent. He struck out 140 batters in 134 1/3 innings but was not in the starting rotation in the postseason. Instead, he gave the Dodgers some solid innings out of the bullpen, not allowing a single run in 5 outings totaling 5 innings over the first two rounds of the postseason, and getting credit for a win in each of the two series, as the Dodgers reached the World Series for the first time since 1988. He continued to pitch well against the Houston Astros in the Fall Classic, with just 1 run allowed in 5 2/3 innings, but the Dodgers fell in seven games. In 2018, he split his time between the starting rotation and the bullpen, making 20 starts in 39 appearances and pitching 125 1/3 innings, his lowest total for the Dodgers. His record was a disappointing 8-10, 3.81.He was again shifted to the bullpen in the postseason, and while he saw a lot of action in a tightly-fought NLCS battle with the Milwaukee Brewers, he was not as good as the year before, logging just 2 2/3 innings in 4 outings, during which he gave up a pair of runs. He again pitched in the World Series, this time against the Boston Red Sox and gave up only 1 run in 3 innings, but the Dodgers lost in 5 games.

In his fourth season with the Dodgers in 2019, Kenta again split his time between the starting rotation and the bullpen, with 26 starts in 37 appearances. He ended up at 10-8, 4.04, with just 114 hits allowed in 153 2/3 innings and 169 strikeouts. He had 3 saves, after recording 1 in 2017 and 2 the year before. The Dodgers won yet another division title that year and had the best record in the National League, but were ambushed by the Nationals in the Division Series. Not that it was Maeda's fault, as he was outstanding during that series, making 4 outings in relief and allowing just 1 hit and no walks in 4 2/3 innings while striking out 7 opponents. On February 4, 2020, he was traded by the Dodgers to the Red Sox as part of the blockbuster deal that brought OF Mookie Betts and P David Price to Los Angeles. The Red Sox were mainly interested in reducing their payroll, however, so they did not keep him around, immediately flipping him to the Minnesota Twins in return for pitching prospect Brusdar Graterol. In Minnesota, he was likely to get a chance to be a full-time starter again for the first time since his rookie season in 2016.

With a three-quarters delivery Maeda throws a fastball that sits in the 88-91 mph range (tops out at 94 mph), a change-up, an occasional curveball, and a solid-average slider around 80 mph. He also has excellent command, posting a walks per nine innings rate of 1.90 in his career (through the 2015 season).