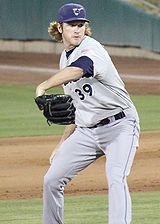 Pitcher Miles Mikolas reached the majors with the San Diego Padres in 2012.

Mikolas finishing his college career with 167 strikeouts, among the top five in school history. He was selected by the Padres in the seventh round of the 2009 amateur draft. He would be the first player San Diego drafted that year to make the majors. He was signed by scout Rob Sidwell and made his pro debut that summer with the Eugene Emeralds, going 1-8 with a 5.94 ERA in 15 appearances, split between the rotation and the bullpen. He tied Christopher Odegaard for the Northwest League lead in losses. The lone bright spot was only 9 walks in 53 innings.

He began 2011 with the Lake Elsinore Storm, notching a dozen saves, three wins and no losses while posting a 1.13 ERA in 34 outings. Promoted to the San Antonio Missions in July, he saved 9 games in 28 appearances for them. He was 1-0 with a 1.67 ERA for San Antonio.

Mikolas began 2012 back with San Antonio (1-1, 4 Sv, 2.92 in 12 G) but was brought up to the majors by the Padres when closer Huston Street went on the disabled list. He made his big league debut against the Miami Marlins on May 5th, relieving in the top of the 9th with a 3-1 deficit. He allowed a leadoff homer to Giancarlo Stanton. He struck out two of the next four batters, while allowing one walk, to escape further damage. He pitched 25 times in San Diego that year, with a 2-1 record and a 3.62 ERA in 32 1/3 innings. He also pitched 17 times in AAA with the Tucson Padres, going 2-1, 3.20. In spite of his good results in his first time facing big league hitters, he was back in the minor for most of 2013. He made 54 relief appearances with Tucson, with a record of 4-2, 3.25 and 26 saves. he struck out 40 batters in 61 innings. He tied Evan Marshall for 7th in the 2013 PCL in games pitched and he was third in saves behind Chris Hatcher and Heath Hembree. He was called up twice by the Padres, both times in July, but made a single appearance each time and then went immediately back to Tucson. He had no record in those two games, pitching 1 2/3 scoreless innings. On November 25th, he and prospect Jaff Decker were sent to the Pittsburgh Pirates in return for AA OF Alex Dickerson, a native of San Diego. On December 30th, he was traded again, going to the Texas Rangers for Chris McGuiness.

Mikolas made his Rangers debut on July 2, 2014, after having started the season in the minors. It was also his first time as a starter in the major leagues. He did alright, allowing 3 runs to the Baltimore Orioles in 5 1/3 innings, leaving with a 4-3 lead, but relievers quickly allowed the O's to tie the game, and then win it, 6-4, as he ended up with a no-decision. He had gone 5-1, 3.22 in 16 games for the AAA Round Rock Express, including 6 starts; his most impressive stat was a K/W ratio of 38/3. Prior to 2014, his last professional starts had come in his first season, 2009, when he had struggled in the role. He had a much tougher time of it on August 13th, however, when he gave up 10 runs in 6 innings in a loss to the Tampa Bay Rays. He had to keep on pitching in spite of struggling badly because the Rangers' bullpen was completely spent: they needed to use rookie Alex Claudio, making his major league debut after arriving at the ballpark late in the day, and C J.P. Arencibia to finish the game.

Mikolas pitched in Japan with the Yomiuri Giants from 2015 to 2017. He was quite successful, going 13-3, 1.92 the first year and 14-8, 2.25 the last (he was 4-2, 2.45 in 14 games in 2016). His strikeout rate also improved over the three season, reaching 187 in 188 innings the final year. As a result, he elicited a lot of interest when he decided to return to the United States following the 2017 season, as he signed a two-year deal with the St. Louis Cardinals worth $15.5 million. He celebrated his return to the majors on April 2, 2018, by connecting for a homer with a runner on base against Kyle Davies of the Milwaukee Brewers; it was his first career hit in MLB. He went on to be credited with an 8-4 win, giving up 4 runs in 5 2/3 innings. He got off to a great start with his new team, as after his first seven starts, he was 5-0, 2.51 with a K/W ratio of 35/3. On May 21st, he pitched his first career shutout, a four-hitter in a 6-0 win over the Kansas City Royals. He made the All-Star Game and finished the year with an outstanding record of 18-4, 2.83, tying for the National League lead in wins and shutouts and leading th circuit in winning percentage. He struck out 146 batters while walking just 29 in 200 2/3 innings.

Following his excellent first season with the team, in February 2019 the Cards signed him for another four years for $48 million.

He earned his nickname, "Lizard King", because he once ate a live lizard while in the Arizona Fall League as a member of the Padres' organization in 2011.