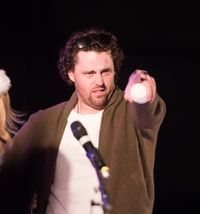 Heath Hembree made the major leagues in 2013.

Hembree was 7-0 with a 1.22 ERA in junior college. He was 5-3 with four saves and a 6.52 ERA for the College of Charleston in 2010 but did strike out 42 in 29 innings. The San Francisco Giants gambled by taking him in the fifth round of the 2010 amateur draft, one round after Seth Rosin and one round before Mike Kickham. The scout was Jeremy Cleveland.

The Giants brought up Hembree as a September call-up in 2013. In his major league debut on September 3rd, he pitched the 8th inning of a 3-2 loss to the San Diego Padres. He retired Alexi Amarista on a fly then whiffed Kyle Blanks and Logan Forsythe for a fine debut. He ended up pitching 9 times in relief, with a spotless ERA, giving up only 4 hits and 2 walks in 7 2/3 innings while striking out 12. He was back in Fresno in 2014, pitching 41 times with a record of 1-3 and a 3.89 ERA while picking up 18 saves by the end of July. On July 26th, he was traded to the Boston Red Sox along with Edwin Escobar in return for veteran starter Jake Peavy. He made 6 relief appearances for the Red Sox late in the season, with no record and an ERA of 4.50. In the minor leagues, he was 1-4, 3.91 with 20 saves in 48 games between Fresno and the Pawtucket Red Sox. He then split the 2015 season between Pawtucket and Boston. In AAA, he was 0-5 but with a 2.27 ERA and 8 saves in 29 games, and with Boston he was 2-0, 3.55 in 22 games. His first career win came on September 13th against the Tampa Bay Rays when he pitched a scoreless 12th inning before the Sox broke a scoreless tie with two runs in the top of the 13th.

He began the 2016 season back at Pawtucket but he was called up after four games in which he gave up nor runs and recorded two saves. His first major league outing on April 19th had a lot of similarities with his maiden win, as it was another game against Tampa Bay that was scoreless into extra innings. This time however, he had to step in in the 1st inning, when Joe Kelly was removed with a shoulder injury after only recording two outs. Hembree stepped up however, pitching 3 1/3 scoreless innings in an unfamiliar role. On September 25th, he played a key role in the Red Sox setting two major league records: he relieved Eduardo Rodriguez with one out in the 5th in a game against the Tampa Bay Rays. Rodriguez had pitched well, matching a career high with 13 strikeouts, including the last 6 men he had faced, but had run a high pitch count in the process. Heath took over and retired all five batters he faced. That gave the Red Sox 11 straight strikeouts, besting the existing major league record by one. Relievers Matt Barnes and Kelly added three more Ks over the next two innings, giving Boston 21 over the first 9 innings, setting another mark, again by one. The Red Sox then won the game in the 10th, 3-2, their 11th straight win. He finished the season at 4-1, 2.65 in 38 games.

Hembree then settled into being one of the more reliable if lower profile members of a very strong bullpen for the Red Sox. In 2017, he went 2-3, 3.63 in 62 games, striking out 70 batters in 62 innings. In 2018, with Boston having one the best season in its history, he was 4-1, 4.20 in 67 games, once again displaying a very good strikeout rate with 76 Ks in 60 innings. He appeared in the postseason for the first time, making four scoreless appearances, totaling 4 2/3 innings in Boston's run to a World Series title. He pitched one inning against the Los Angeles Dodgers in the Fall Classic itself, in the only game Boston lost, Game 3 on October 26th, which went 18 innings. He was the 8th pitcher used, in the 12th inning, allowing just a walk, but was the last available reliever. Starter Nathan Eovaldi then replaced him and went the rest of the way, producing a tremendous outing even though he ended up charged with the loss after 6 innings of work.

In 2019, the Red Sox fell back to earth, but Hembree had another good season, pitching 45 times with a record of 1-0, 3.86. With the departure of closer Craig Kimbrel, he was given an opportunity to earn the first 2 saves of his career, but was normally confined to his usual middle reliever role, striking out 46 batters in 39 2/3 innings. He did miss a good chunk of the season with inflammation on his right elbow, being placed on the injured list in early August and only returning in the last days of the season, by which time the Sox had been eliminated form postseason contention. In 2020, the Red Sox started the season stone cold, giving up a ton of runs, and he was forced to appear in a lot of games that were already lost, and his ERA rose as a result. In 11 games, he was 2-0, but with an ERA of 5.59. With the team going nowhere, they began to trade away some veterans that could bring in younger player, and he and fellow bullpen member Brandon Workman were sent to the Philadelphia Phillies on August 21st, in return for Nick Pivetta and Connor Seabold. He was joining a team whose bullpen was a veritable disaster area, putting up a collective ERA above 8.00 in its first 21 games.