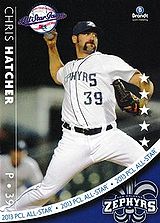 Chris Hatcher was drafted by the Florida Marlins in the 5th round of the 2006 amateur draft. He was signed by scout Joel Matthews and made his pro debut that summer.

Due mostly to his glove, Hatcher made his major league debut as a catcher late in the 2010 season with the Florida Marlins; he went 0 for 6 in 5 games. The following off-season, he was converted to pitching, and after starting at AA, quickly impressed the Marlins' top brass with his strong arm in 2011. He was 2-1, 2.31 in 30 games, with 39 strikeouts in 35 innings, for the Jacksonville Suns when the Marlins called him up over the All-Star break. He made his debut as a pitcher on July 16th, pitching a perfect inning against the Chicago Cubs at Wrigley Field in a 13-3 win, less than a year after making his major league debut as a position player. The last player to make a similar quick transition from the backstop to the mound was Art Doll, with the 1936 Boston Bees.

Hatcher made a few appearances for the Marlins each year from 2011 to 2013 while pursuing his apprenticeship in the minors, before spending his first full season at the major league level in 2014. In 52 games, he went 0-3, 3.38, pitching 56 innings and striking out 60 batters. After the season, on December 10th, he was traded to the Los Angeles Dodgers along with P Andrew Heaney and utility players Austin Barnes and Enrique Hernandez in return for 2B Dee Gordon, P Dan Haren and IF Miguel Rojas. After going 0-7 through his first 100 games, covering five seasons, he finally earned his first big league win on May 22, 2015, when Joc Pederson homered off Joaquin Benoit of the San Diego Padres in the bottom of the 8th inning to break a 1-1 tie. He had recorded his first career save in his first appearance for the Dodgers, on April 6th also against the Padres, filing in for Kenley Jansen who had started the year on the disabled list. He went 3-5, 3.69 in 49 games that year, with 4 saves. He also pitched in the postseason for the only time of his career, making 4 appearances during the NLDS against the New York Mets with no decisions and an unblemished ERA in 3 2/3 innings.

Chris took a step back in 2016, as his ERA shot up to 5.53 in 37 games, during which he went 5-4. He struck out 43 batters in 40 2/3 innings while allowing 40 hits and 21 walks. He was not used in the postseason that year. In 2017, with the Dodgers having one of the best seasons in franchise history, he was 0-1, 4.66 after 26 games, no longer playing a key role in the bullpen after missing 42 games with a thoracic inflammation. On August 15th, he was sent to the Oakland Athletics in return for pool money for international signings. In 23 games for Oakland, he was 1-1, 3.52 with a save. He then returned to Oakland in 2018, making another 34 appearances and going 3-3, 4.95. The A's made it to the postseason, losing the Wild Card Game to the New York Yankees but Chris did not play in the game. His final appearance was on September 30th and he retired after the season.