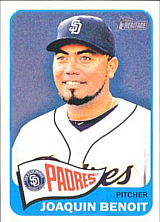 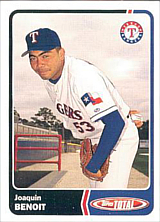 Joaquín Benoit spent his first eight major league seasons with the Texas Rangers, being used regularly as a starter from 2001 to 2005, then exclusively as a reliever from 2006 to 2008. He had his best season in Texas in 2007, when he saved 6 games and went 7-4 with a 2.85 ERA and 87 strikeouts in 82 innings. On September 3, 2002, Benoit recorded the longest save in major league history, pitching 7 innings in relief of Todd Van Poppel, who earned the win after replacing Aaron Myette, who was ejected after throwing only two pitches. He allowed one run on one hit in the 7-1 win over the Baltimore Orioles; that hit was a 9th-inning triple by Jerry Hairston, and was the only one surrendered by the Rangers that day. He began experiencing arm problems in 2008, when his ERA jumped to 5.00, and missed all of 2009. He resurfaced in 2010 with the Tampa Bay Rays where he found tremendous success as a set-up man for closer Rafael Soriano, posting an ERA of 1.34 in 63 games.

On November 17, 2010, Benoit signed as a free agent with the Detroit Tigers, inking a three-year deal worth $16.5 million. In his first season with the Tigers in 2011, he was 4-3 with a 2.95 ERA in 66 games as the set-up man for Jose Valverde, who also had an outstanding season. He struck out 63 in 61 innings, giving up only 47 hits and 17 walks, while not allowing a run over his final 22 innings. In the postseason, he gave up a single earned run in 7 1/3 innings over 5 appearances. He had another good year in 2012, going 5-3, 3.68 in 73 appearances, striking out 84 in 71 innings. He gave up 2 runs in 3 innings against the Oakland Athletics in the ALDS, but followed by giving up no runs in the ALCS or World Series, although that only represented three outings, given the Tigers won easily against the New York Yankees in the ALCS, and never had a lead to hold in the Fall Classic as they were swept by the San Francisco Giants. In 2013, the Tigers struggled to find a closer in the early going, but manager Jim Leyland wanted to keep Benoit in his familiar set-up role. When José Valverde was brought back from the dead and failed to do the job, there was no choice but to turn to Benoit and he did well, notching 24 saves while going 4-1, 2.01 in 67 games. He saved two games against the Athletics in the Division Series and another in the ALCS, although he did not pitch particularly well, giving up 4 runs in 5 2/3 innings over 6 outings. The key moment was the grand slam homer he gave up to David Ortiz of the Boston Red Sox in Game 2, which turned around the series.

After the season, he became a free agent and signed with the San Diego Padres on December 18th for two years at $15.5 million. Benoit went 4-2, 1.49 in 53 games with the Pads in 2014. He gave up only 28 hits and 14 walks in 54 1/3 innings, striking out 64 opponents and logging 11 saves. In 2015, the Padres acquired Craig Kimbrel to be the closer with Benoit the set-up man. While the Friars did not do so well, Joaquín had another solid season, with a record of 6-5, 2.34, 36 hits allowed in 65 1/3 innings, 23 walks and 63 strikeouts. With Kimbrel getting almost all of the save opportunities, he recorded just 2 saves. On November 12th, knowing that they were not going to re-sign him, the Padres traded Benoit to the Seattle Mariners in return for a pair of minor leaguers, Enyel De Los Santos and Nelson Ward. Things did not go so well for Benoit with the M's in 2016, as in 26 games, he was 1-1, 5.18 with no saves but 8 holds. On July 26th, he was flipped to the Toronto Blue Jays in return for Drew Storen, who had been struggling even worse than he had. The change of uniforms helped Benoit as he started his Jays career with a team record 18 consecutive scoreless appearances before giving up a three-run homer to David Ortiz of the Boston Red Sox on September 11th. On September 26th, he was the victim of a freak injury when he tore a calf muscle tripping and falling while running from the dugout during a benches-clearing incident. The injury rendered him unavailable for the postseason. Still, in 25 games, he put up a sparkling 0.38 ERA in 23 2/3 innings, as Ortiz's long ball was the only run he had given up as a Jay. His tremendous second half meant he had lowered his season's ERA to 2.81, and he had recorded a pair of wins and a save while with Toronto.

On December 6, 2016, Benoit signed a one-year free agent deal with the Philadelphia Phillies worth $7.5 million. Originally scheduled to be one of the set-up men for Jeanmar Gomez in 2017, it took him only a week to upstage the nominal closer. Gómez had saved 37 games in 2016 but struggled in September, and when he started off the year with some shaky outings, manager Pete Mackanin made a quick decision to put the 39-year-old veteran in charge of finishing games, although that did not last. He went 1-4, 4.07 with 2 saves in 44 games, then on July 31st was traded to the Pittsburgh Pirates for Seth McGarry. He made just 8 appearances with Pittsburgh, going 0-2, 7.56. On February 19, 2018, he signed a one year contract with the Washington Nationals, but for considerably less money that a year before, as his salary was $1 million. He did not pitch for the Nationals that year due to a shoulder injury and has not played professionally since.