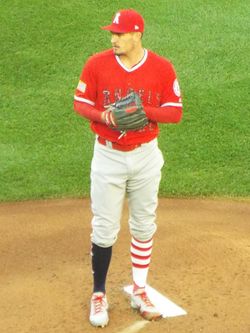 Pitcher Andrew Heaney was selected by the Tampa Bay Rays in the 24th round of the 2009 amateur draft. He did not sign and instead attended Oklahoma State University. He was then taken by the Miami Marlins with the ninth overall selection in the 2012 amateur draft. He signed just before the deadline for a $2.6 million bonus and soon made his pro debut with the GCL Marlins. After allowing 2 earned runs in 7 innings with that club, he was promoted to the Greensboro Grasshoppers.

He made his major league debut with the Marlins on June 19, 2014, starting against the New York Mets. He pitched very well, giving up only one run in six innings, but his opponent, Zack Wheeler, pitched the first shutout of his career and Andrew was saddled with a 1-0 loss. He made 7 appearances, including 5 starts, for Miami, going 0-3, 5.83. On December 10th, he was traded twice on the same day, first going to the Los Angeles Dodgers with Chris Hatcher, Austin Barnes and Enrique Hernandez for Dee Gordon, Dan Haren and Miguel Rojas, and then being sent to the Los Angeles Angels of Anaheim for 2B Howie Kendrick, the player the Dodgers had targeted all along.

Heaney began the 2015 season in the minors but got off to a very good start after making his first appearance for the Angels on June 24th, giving up 1 run in 6 innings in a start against the Houston Astros. He ended up with a no-decision that day, but won his next three starts, pitching at least 7 innings each time, and went into the All-Star break with a record of 3-0, 1.32. He was named the American League Rookie of the Month for July, thanks to a record of 4-0, 1.98. He went 6-4, 3.49 in 18 starts, pitching 105 2/3 innings. The Angels were counting on him to be a key part of their starting rotation in 2016 but he made only one start, losing 6-5 to the Chicago Cubs on April 5th. He then went on the disabled list with a torn ulnar collateral ligament, but as rest did not help him, he underwent Tommy John surgery at the end of June. The prognosis was that he would miss the rest of 2016 and all of 2017 as well. However, he beat that by coming back to the majors on August 18, 2017. He pitched 5 times for the Angels, last on September 9th, going 1-2, 7.06.

In 2018, Heaney was back in full health, and was pitching relatively well as by the end of May, he had a 3.66 ERA after 9 starts, even if his record was only 2-4. On June 5th, however, he pitched the best game of his career when he unfurled a one-hitter to celebrate a 27th birthday, defeating the Kansas City Royals, 1-0. The only hit was a 5th inning single by Hunter Dozier. He went 9-10, 4.15 in 30 starts and 180 innings, setting personal bests in almost all categories, also including innings pitched and strikeouts (both at 180). He was tied for the American League lead in shutouts, with 1. However, he was never able to reproduce that good year. He went 4-6 and 4-3 in 2019 and 2020 respectively, with ERAs of 4.91 and 4.46. In 2020, his 12 starts were the equivalent of a full season, given that the season was shortened to 60 games by the Coronavirus pandemic.

He was back for a full season in 2021, although results were mediocre. He made 18 starts for the Angels, going 6-7 with a 5.27 ERA before being traded to the New York Yankees on July 30th in return for Janson Junk and Elvis Peguero. The Yankees used him as a swingman the rest of the way, although his results were poor and local fans were unimpressed, as he went 2-2, 7.32 in 12 games. Altogether, his numbers for the season were 8-9, 5.83 in 30 games and 129 2/3 innings. He became a free agent after the season and on November 8th, he was the first free agent to sign with a new team that off-season, inking a one-year deal with the Los Angeles Dodgers, who had very briefly held his rights seven years earlier. Completely unexpectedly, he began 2022 pitching like an ace for the Dodgers: over his first two starts, he went 1-0 with a virgin ERA over 10 1/3 innings, with 16 strikeouts and just 3 walks. Unfortunately, after these two successful outings, he was placed on the injured list with left shoulder discomfort.

Outside of baseball, Heaney began making annual pilgrimages to Honduras following the 2014 season, helping to build an orphanage and learning center outside of San Pedro Sula.