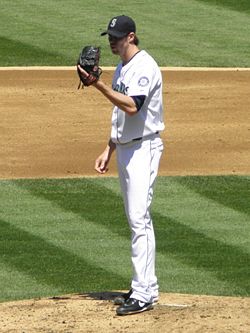 Tall, lanky, pencil-thin Doug Fister has been a solid major league pitcher since breaking in with the Seattle Mariners in 2009 at age 25. Sporting outstanding control, a menacing curveball and a decent fastball, he's been a productive starter. His career won-lost record is deceiving because, especially in the early part of his big league career, he was a victim of a lack of run support on his behalf.

Pitching for the Mariners, Fister made his first major league start on August 11, 2009 against the Chicago White Sox and Mark Buehrle, a few weeks after Buehrle had pitched a perfect game. Fister allowed no runs and a single hit - an infield single by Jim Thome - over six innings and left with a 1-0 lead. He ended up with a no-decision when closer David Aardsma blew the save opportunity in the 9th inning and Seattle lost, 3-1.

Fister had terrible luck pitching for the Mariners in the first part of the 2011 season. After 21 starts, he was 3-12, even though he had a 3.33 ERA, good for a 111 ERA+; he had completed three games, all of them losses. The cause of his poor record was having the worst run support of the majors. The Mariners took him out of his misery on July 30th, trading him to the Detroit Tigers, along with David Pauley, in return for P Charlie Furbush, 3B Francisco Martinez, OF Casper Wells and a player to be named later (Chance Ruffin). Fister ended the run of bad luck in his Tiger debut on August 3rd, beating the Texas Rangers, 5-4, for his first win since May 30th. He then continued to pitch well for the first-place Tigers. On August 25th, he picked up his 6th win by throwing 7 scoreless innings in a 2-0 shutout of the Tampa Bay Rays, matching in three weeks with the Tigers the win total it had taken him four months to accumulate with the Mariners. He capped this remarkable turnaround by being named American League Pitcher of the Month for September, after going 5-0, 0.53 with a tremendous 34/3 K/W ratio. He ended the year 11-13, having gone 8-1, 1.79, for the Tigers.

Fister suffered a rib injury making his first start of the 2012 season on April 7th against the Boston Reds Sox. He was removed from the game after 3 2/3 scoreless innings and immediately placed on the disabled list. Reliever Duane Below got credit for the Tigers' 10-0 win. He returned to make 6 starts in May, but was 0-3 in spite of a decent 3.52 ERA. He then missed the first two weeks of June before finally registering his first win of the year on June 16th, thanks to six scoreless innings against the Colorado Rockies. His record had fallen to 1-6 on July 2nd when he began to get hot. He went 4-1 during the rest of the month, lowering his ERA from 4.61 to 3.77 in the process, then won two of his first three starts in August - the other being a no-decision to finally even his mark at 7-7 after a win on August 14th; by then, he had managed to lower his ERA to an excellent 3.24. On September 22nd, he registered his 10th win with his first career shutout, 8-0 over the Minnesota Twins. In his next start on September 27th, he struck out 9 consecutive Kansas City Royals batters to set a new American League record; the previous mark of 8 had been set several times, last by Blake Stein of the Royals in 2001, but was still one shy of Tom Seaver's major league record. He finished the season with a record of 10-10, 3.45, with 137 strikeouts in 161 2/3 innings. He pitched very well in the postseason, but did not pick up any wins in spite of his valiant efforts. In Game 2 of the ALDS, he limited the Oakland A's to 2 runs in 7 innings but Joaquin Benoit blew a save opportunity, and in Game 1 of the ALCS, it was Jose Valverde's turn to sabotage his effort, after he had held the New York Yankees scoreless in 6 1/3 innings. The Tigers eventually won both games, and gave Fister the ball again for Game 2 of the 2012 World Series on October 25th. He pitched 6 scoreless innings in spite of taking a ball from Gregor Blanco off the side of his head in the 2nd inning, then allowed a lead-off single to Hunter Pence in the 7th. He was taken out of the scoreless game at that point and his replacement, Drew Smyly, allowed Pence to score the game's first run; as a result, Doug was tagged with Detroit's 2-0 loss.

Fister had a very solid season for the Tigers in 2013, although it largely went under the radar with all the attention going to Cy Young Award winner Max Scherzer and ERA Champion Anibal Sanchez. Quietly, Fister went 14-9, 3.67 in 33 games, pitching 208 2/3 innings and striking out a career-high 159 batters as the Bengals' fourth starter. The Tigers repeated as AL Central champions and Fister started Game 4 of the ALDS against Oakland. He gave up 3 runs in 6 innings and left with the game tied, 3-3. The Tigers won the game and the series and Doug was back on the mound for Game 4 of the ALCS, this time facing the Red Sox on October 16th. He pitched very well, giving up a run on 8 hits and a walk while striking out 7 in 7 innings and was credited with his team's 7-3 win. However, the Red Sox won the final two games of the series to eliminate Detroit from the postseason. On December 2nd, he was traded to the Washington Nationals in return for three players - 2B Steve Lombardozzi and Ps Robbie Ray and Ian Krol -, joining another powerful starting rotation with a contending club.

Fister had to delay his debut with the Nationals in 2014 as he began the season on the disabled list, victim of a strained muscle in his upper back. He made his first start on May 9th, and lost that game to the Oakland A's, 8-0, but was excellent the rest of the way as he went 16-6, 2.41 in 25 starts. He pitched 164 innings, recorded 98 strikeouts and was credited with his second career shutout when he blanked the Florida Marlins, 4-0, in his last start of the year, in the first game of a doubleheader on September 26th. the Nationals finished with the best record in the National League and Doug was full of confidence heading into the postseason. Indeed, he started Game 3 of the NLDS against the San Francisco Giants on October 6th and went 7 innings without allowing a run to receive credit for a 4-1 win, but the Nats had already lost the first two games and lost Game 4 as well to suffer an ignominious early exit from the postseason. 2015 was then a year to forget, as the acquisition of former Tigers teammate Max Scherzer in the off-season made for a crowded starting rotation. He was limited to 15 starts in 25 games and did not pitch particularly well, ending up at 5-7, 4.19 in 103 innings while the Nats, who were heavily favored to repeat as division winners before the season, finished well behind the New York Mets in the NL East.

He became a free agent after the 2015 season and on January 28, 2016, signed a one-year deal with the Houston Astros. He went 12-13, 4.64, making 32 starts and pitching 180 1/3 innings. He then did not sign a new contract until May of the following year, inking a minor league deal with the Los Angeles Angels of Anaheim. After three appearances with the Salt Lake Bees, he was claimed off waivers by the Boston Red Sox on June 23, 2017. He was used as a spot starter and long reliever with mixed results until August 22nd, when he pitched one of the best games of his career, a complete game one-hitter in which he defeated the Cleveland Indians, 9-1, the only hit being a solo homer by Francisco Lindor to lead off the 1st inning. He finished the season at 5-9, 4.88 for Boston, but these uneven results were enough to afford him an opportunity to start Game 3 of the ALDS against his former team the Astros, as there were few obvious candidates to succeed the team's two aces, Chris Sale and Drew Pomeranz, who had started the first two games. Fister's start on October 8th was terrible, however, as he gave up 3 runs in just 1 1/3 innings before manager John Farrell replaced him with Joe Kelly, normally a late-game reliever, in a desperate bid to keep the game alive. It worked as Kelly and three other relievers kept the Astros from adding to their tally, and Boston eventually came back to win the game 10-3, its sole victory of the postseason.